Series A Rounds Are a Math Test

For your seed stage startup to graduate to the next level, it must pass a new test.

Your startup might have more of one than the other, and that's OK.

But less of one means you need more of the other. That's just math.

How much more? It turns out – more than you think.

In addition to factors like team quality and market size (which also matter at the pre-seed/seed stage), investors evaluate Series A startups on their traction and monetization.

By traction, I mean some rough mix of:

By monetization, I'm loosely referring to:

Note: monetization is a catch-all for activities and metrics that tend to correlate with revenue, so a company with zero revenue can still have a decent monetization "score."

If traction and monetization are collectively high enough, you will successfully raise your Series A round.

You can even make a little equation out of this:

There's a threshold, a sort of activation energy, required to successfully raise a round at the early-stage. Hit this bar and you're in the clear. Miss it, and you're not:

Let's make up some numbers.

Say the threshold is "4". You'd need some combination of traction and monetization to get to a sum of four:

As long as you can get to a total of four, you're good.

What if our model is wrong though?

Through this lens, the marginal value of one factor depends on the other. Traction makes monetization more valuable, and vice versa. Monetization is more valuable when you have more traction.

This is a much better model for how venture investors think about startups.

The multiplicative model has an important implication however – it disproportionately penalizes low traction and/or low monetization. 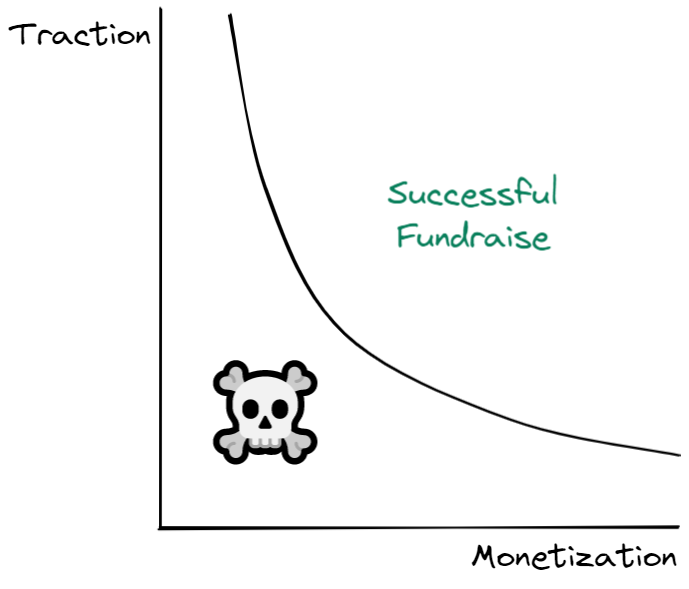 Here's an analogy – a stock that drops by 50% (OK, maybe more reality than analogy) must rise by much more than 50% to reach its original price level, since returns are multiplicative (50% x 150% is only 75%). Likewise, low monetization requires more than proportionally higher traction to make up for it.

You can see where this is going.

Unfortunately, founders fall into the trap of thinking low monetization or traction can be made up for with merely moderate amounts of the other factor. This is wrong.

Many founders think investors will evaluate them with the linear, additive model. While many investors are quite linear in their thinking (sorry, had to do it), the multiplicative perspective is the more accurate one.

This clash of reality vs. expectations creates a "no man's land" between the additive and multiplicative perspectives: founders think they'll be fine when they go out to fundraise, only to be rudely mugged by the valley reality: 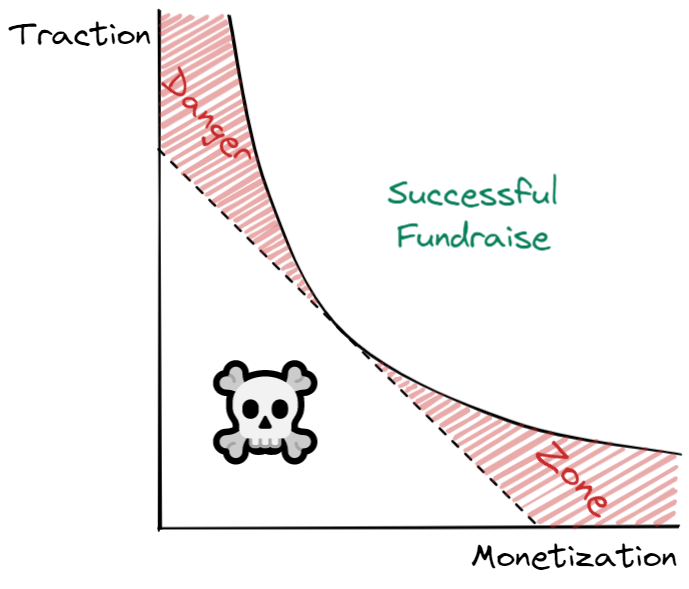 I've noticed many startups in the space between the linear and convex curves attempting to raise Series A rounds lately. This invariably goes badly. The founders are surprised by the lack of investor interest and end up taking much longer to raise their round, at a lower valuation than expected.

Some never raise at all.

Avoid this needless suffering. Be honest with yourself – if you're lacking in either traction or monetization, be sure you're killing it on the other dimension.

I've made the point that low monetization requires extraordinary traction (and vice versa), but I haven't defined what "extraordinary" means. Frankly, it's subjective at best, and I'd be lying if I said there was an objective standard or rubric.

When you know, you know:

… once you have product-market fit… [business] performance accelerates so meaningfully that any ambiguity goes out the window. You get it "in your gut." It becomes obvious, as nearly everything about the business gets better – Product-Market Fit is Lindy

Further, I've simplified the framework here and taken other factors like team, market, etc as given. Realistically, investors will evaluate those things too, complicating our math a bit:

That's a lot harder to visualize, but the same ideas apply. You need to really spike on one or more factors to make up for lower scores on the others. Get this math wrong, and you'll be in for a nasty surprise.

Rather than cram for the exam, delay your Series A until you pass the simple math test I've outlined here. Until then, keep practicing those multiplication tables!