The Dark Matter of Software Valuations

There's something strange about software valuations.

Investors tend to focus on revenue growth and profitability as significant variables for valuing software companies, but those metrics only explain about half of the overall variation in valuations.

This leaves a vast amount of "dark matter" in the software universe – variation in valuations that goes unexplained.

I want to explore this vast darkness.

Who knew there was such skew? 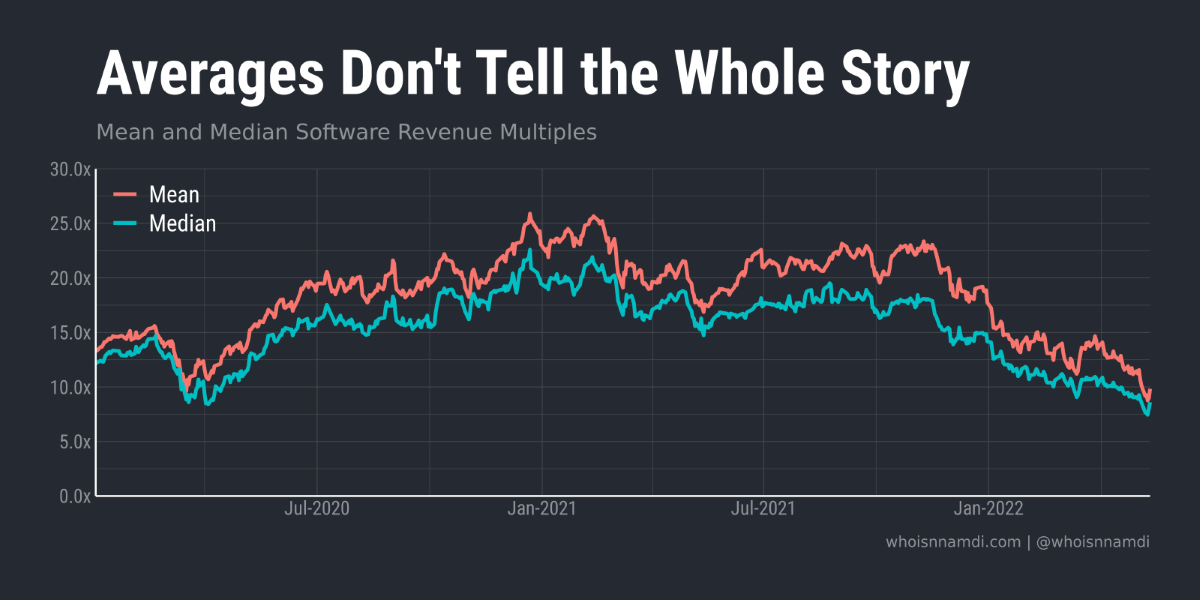 Note: this analysis only includes public software companies that traded continuously from January 2020 to May 2022. Companies that went public or got acquired during that period are excluded.

It's been said before, and it's worth repeating: averages don't tell the whole story.

You can begin to see why by plotting average revenue multiples against median multiples. They aren't the same.

In fact, the distance between them tends to fluctuate over time.

A single line at best summarizes the data and invariably misses important details. 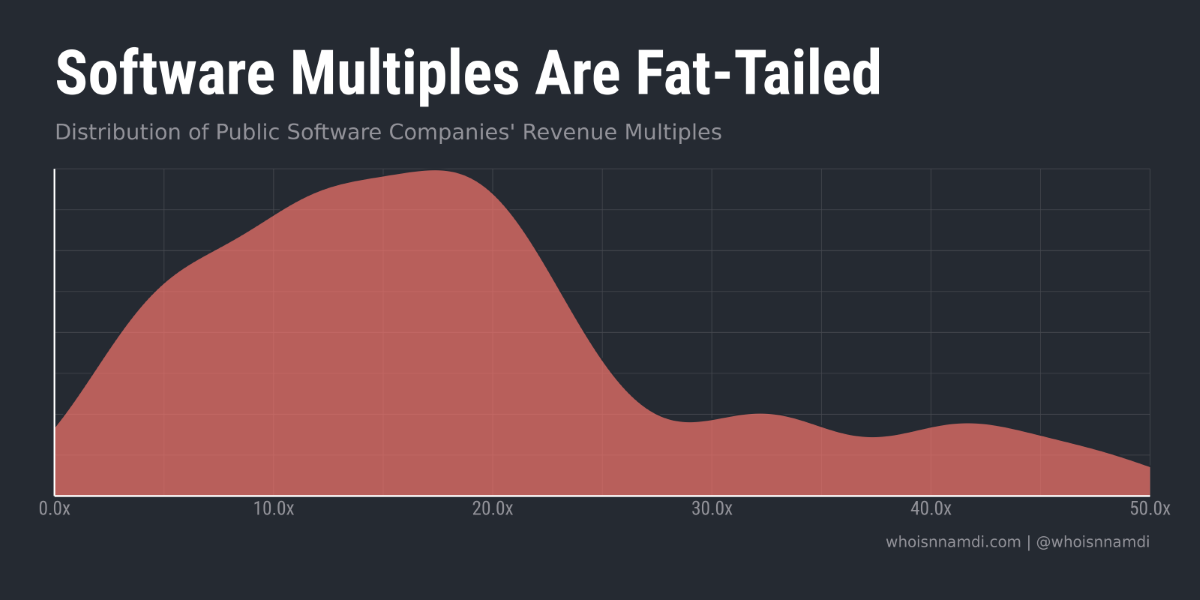 That variance changes over time, rising and falling: 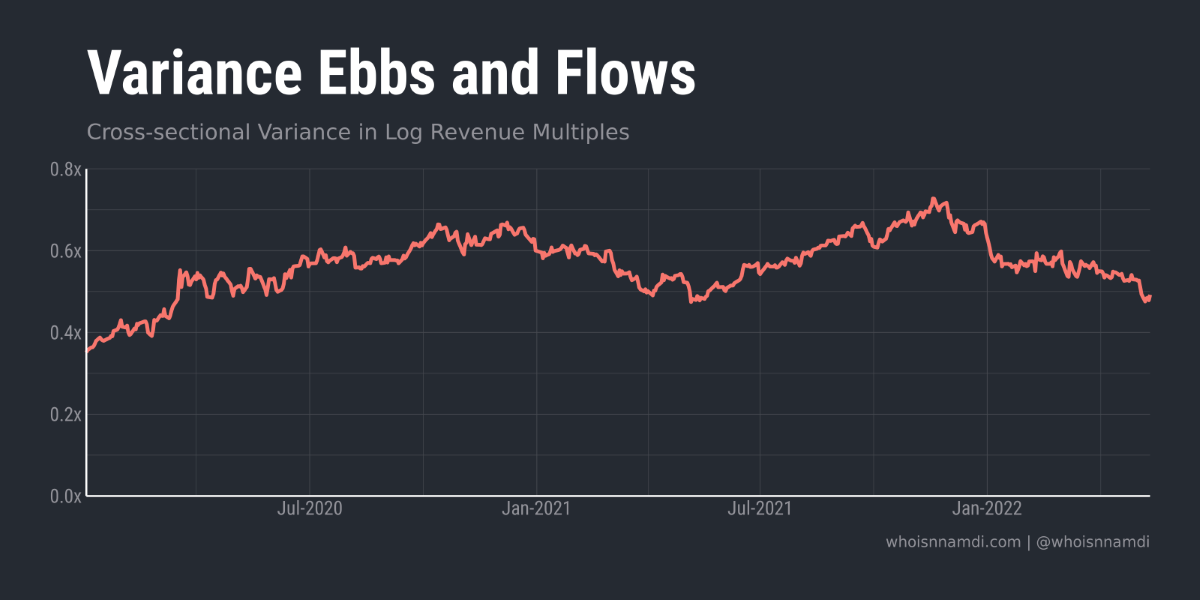 Note: for statistical reasons I won't explain here, the remainder of this essay will refer to log-transformed software multiples instead of their raw values.

I'd love to explain this dynamic.

It's at this point that any good software investor turns to ol' reliable: regressions of valuation multiples on revenue growth and profitability: 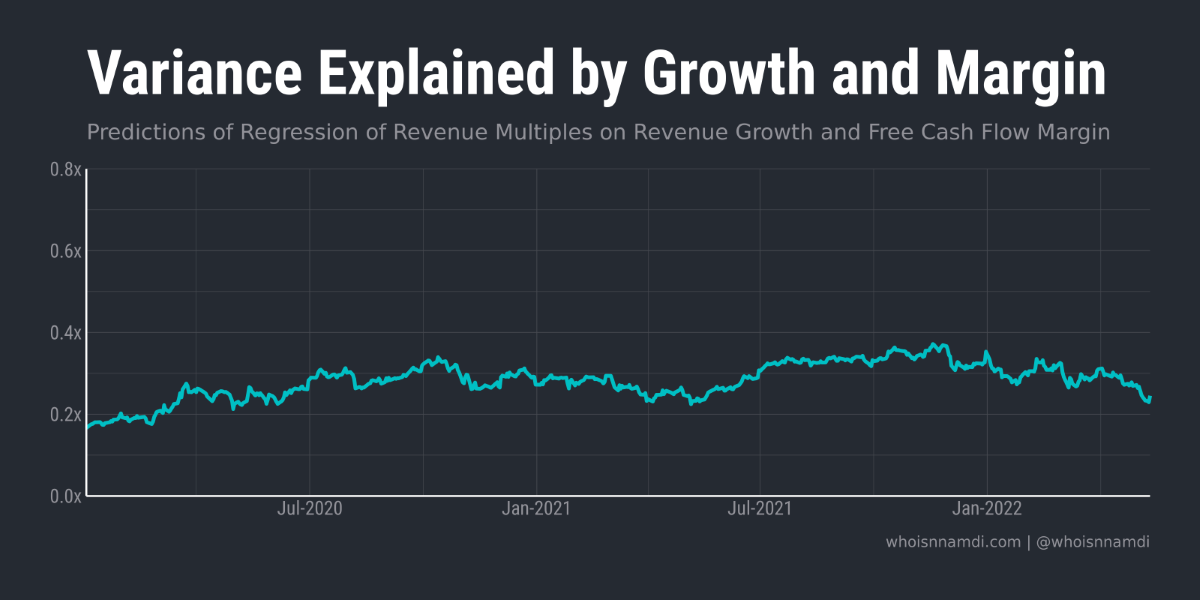 We see a similar, if subdued, pattern in the variance that can be explained by financial performance. But notice how much variance our standard regression leaves on the table, unexplained.

Growth and profitability do not perfectly predict valuations.

I call this unexplained variance, the "dark matter" of software valuations: 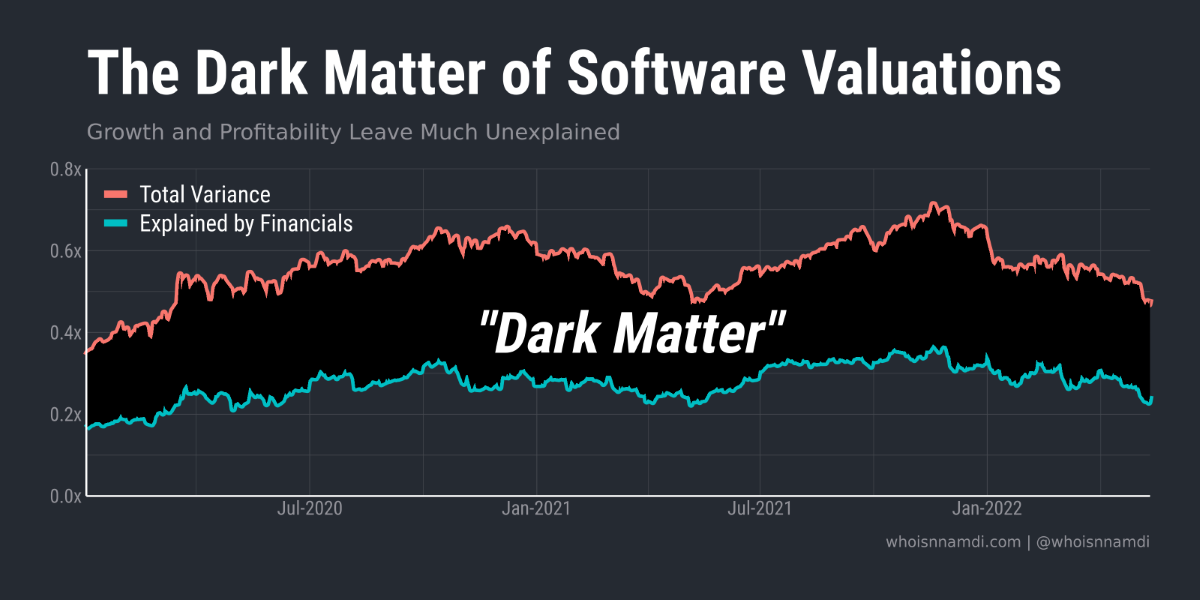 Growth and profitability never explain much more than half of the variation in multiples: 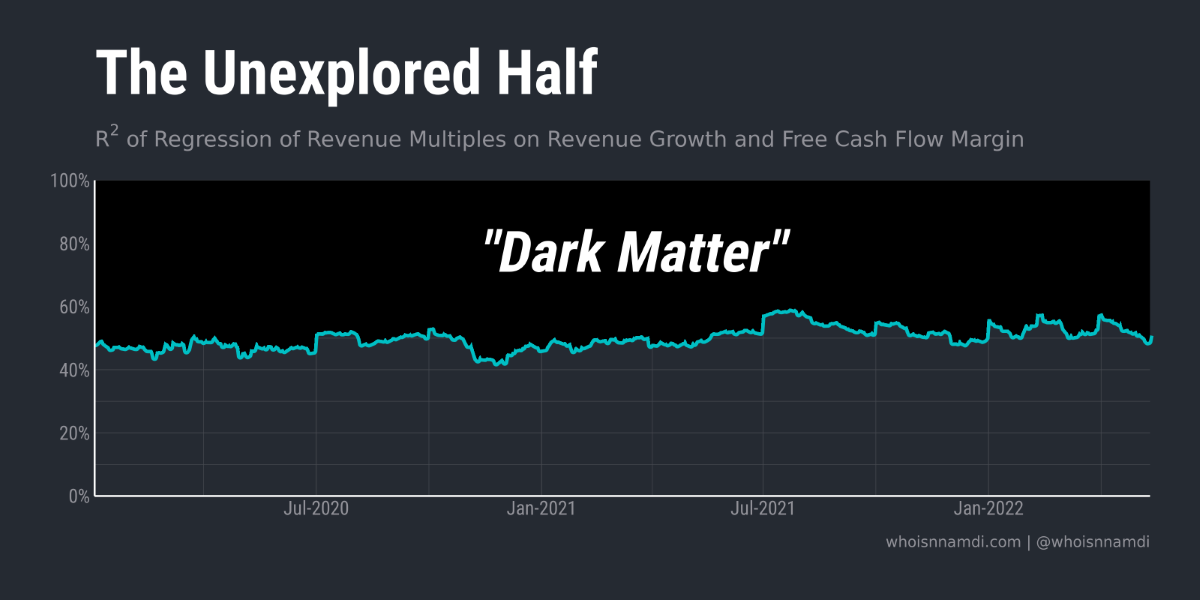 What's hiding down in the deep, dark depths of the software universe?

Let's grab our telescope and zoom in once again.

We know that growth and profitability are imperfect predictors of valuation.

Let's remove their effect and focus now on the remaining, residual, variance in valuations. This means that we'll focus on relative rather than absolute valuations – relative to what growth and margins would predict, that is.

Here's how it looks: 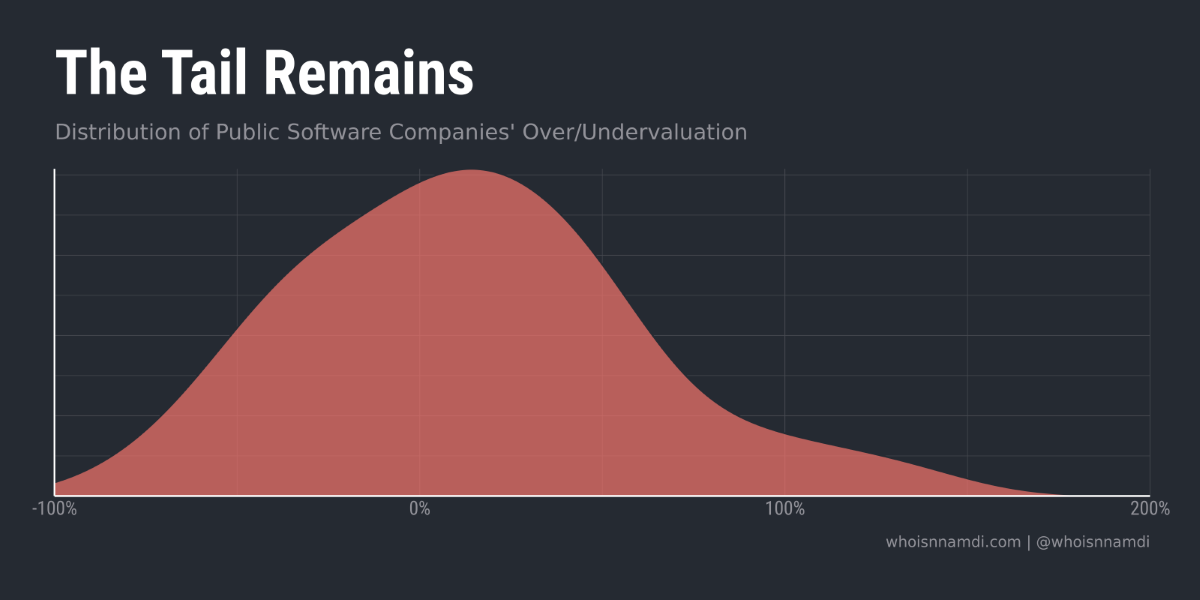 The fat tail is less severe but still persists, even after accounting for financial performance.

Many companies hover near zero, which is to say their valuations are perfectly predicted by growth and profitability, but a number are quite "overvalued" on the basis of their financials alone.

This gap between expectations and reality is quite persistent. Over/undervaluation does not meaningfully mean-revert, even over multiple years: 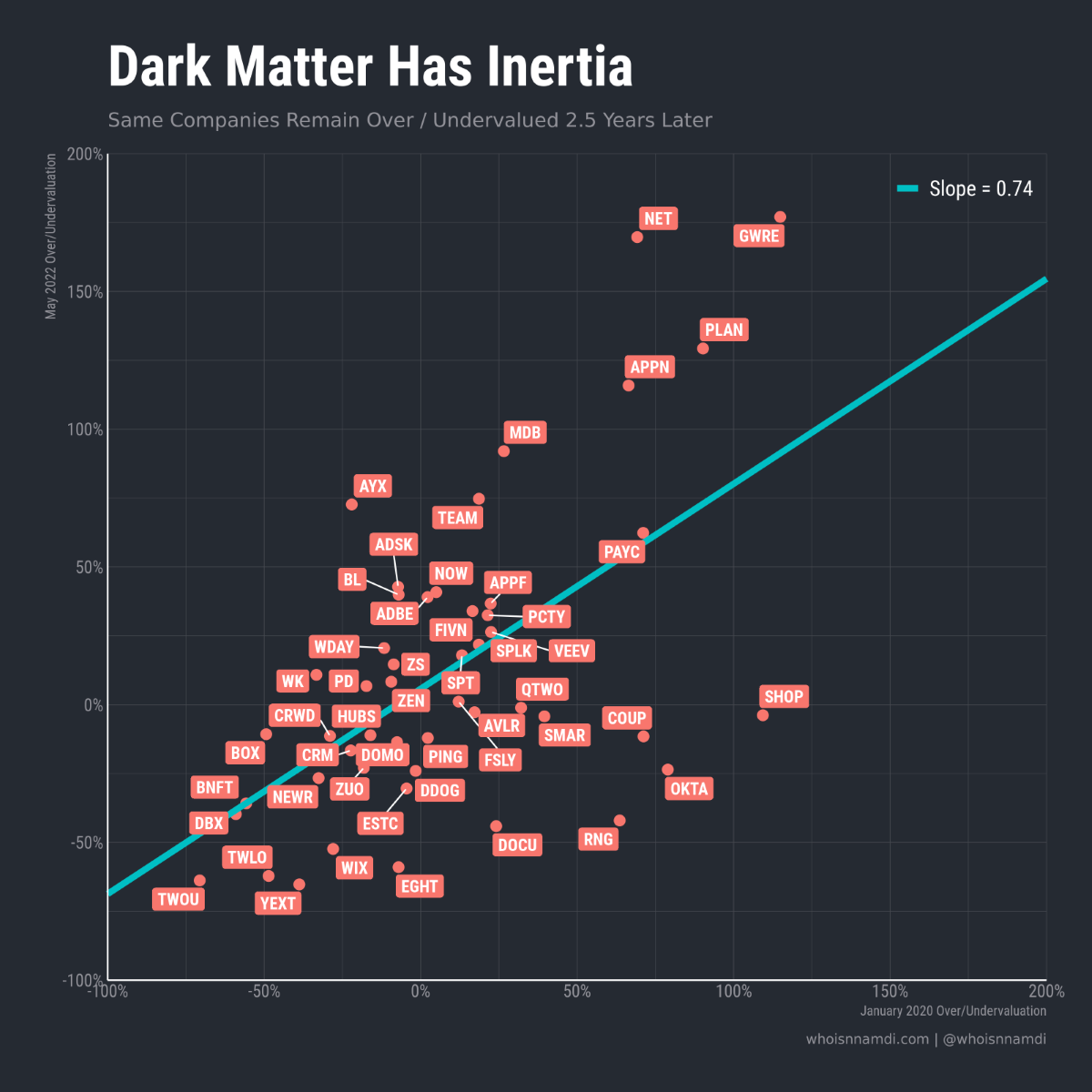 Some did see major revisions:

In addition to individual companies, the overall distribution of unexplained "valuation inequality" held in place the past few years, with some fluctuations: 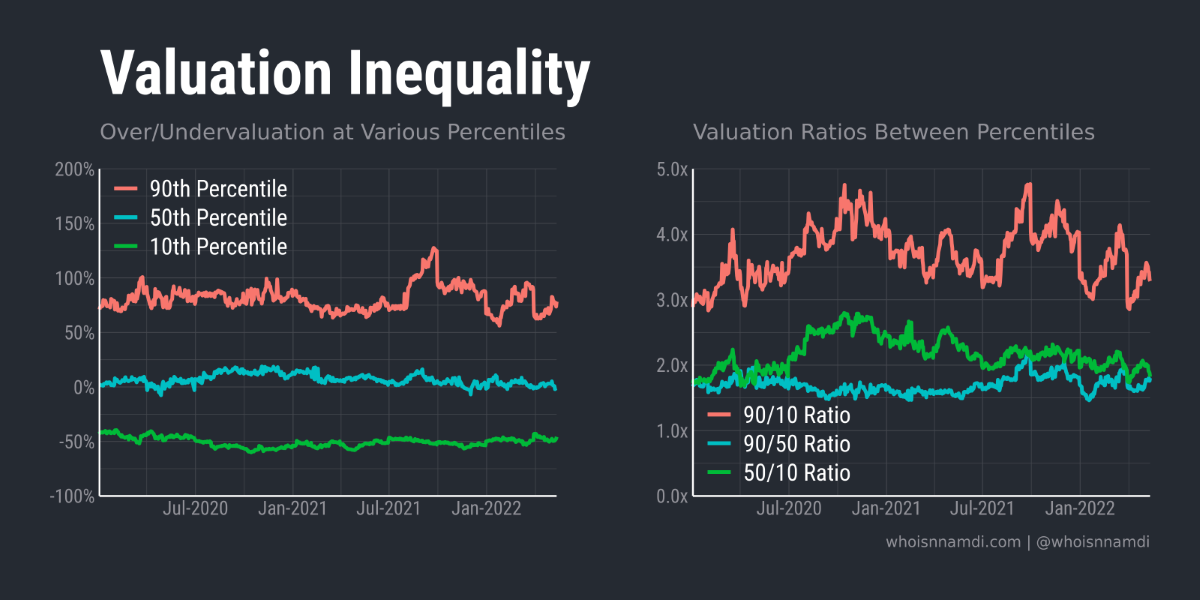 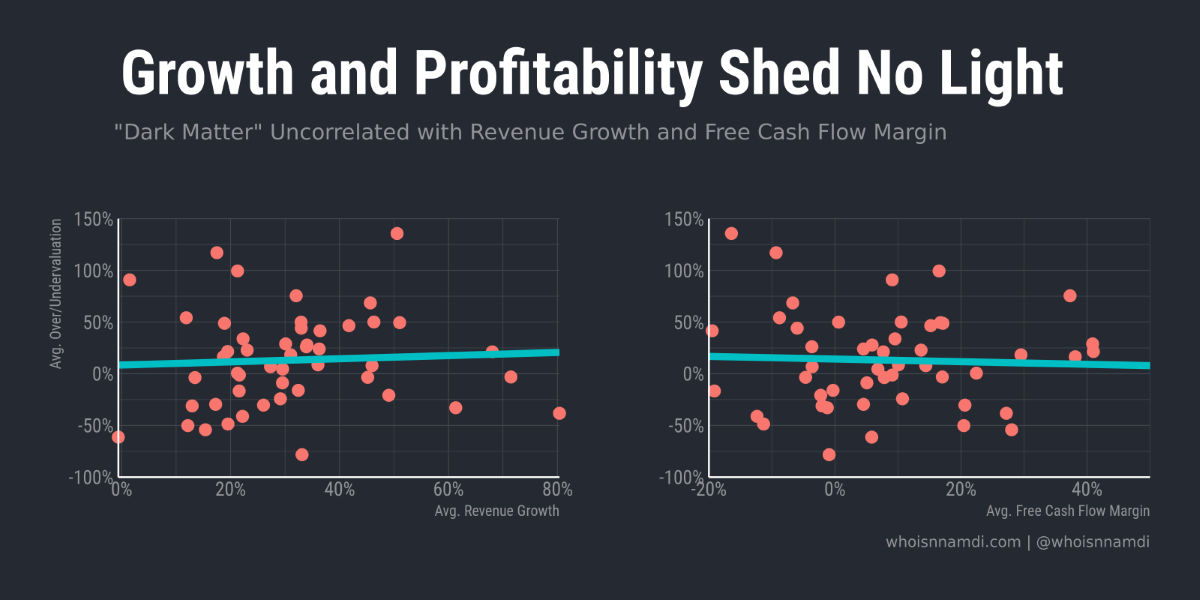 Needless to say, the variation in software valuations is extreme, and that's after factoring out what we'd already expect based on financial profiles.

I hope I've driven the point home that growth and profitability aren't everything.

OK, but what is this dark matter stuff?

Clearly the most obvious metrics fail to account for a sizable share of the variation in valuations among software stocks. Some sort of unobserved or latent characteristics drive the remaining differences.

Principal Component Analysis (PCA) is a great way to identify such latent factors. It's a statistical technique for summarizing the key informational content contained within a larger data set.

A full explanation of PCA is beyond the scope of this essay. Just know that, like alchemy, PCA lets us put dark matter in and get some nuggets of gold out.

When I run PCA, here's what I find: 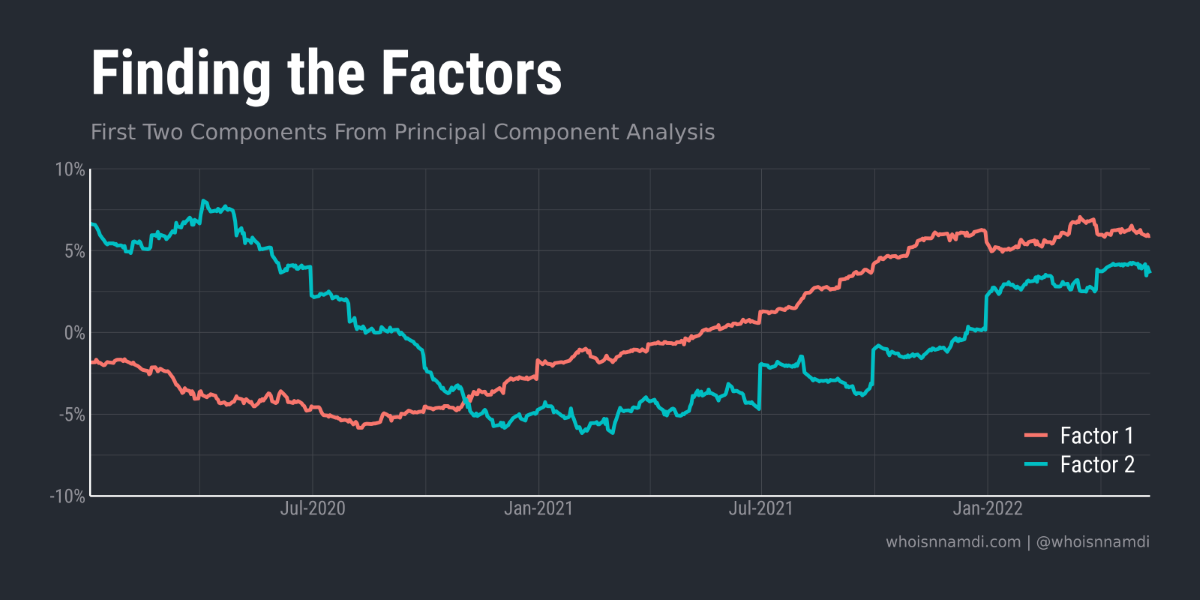 Unfortunately, these factors don't come out of the box with much explanation. We must interpret them manually.

After staring at "Factor 1" for a while, it hit me – the line looks eerily similar to the path of the U.S. economy over that period!

Folks, we have a winner: 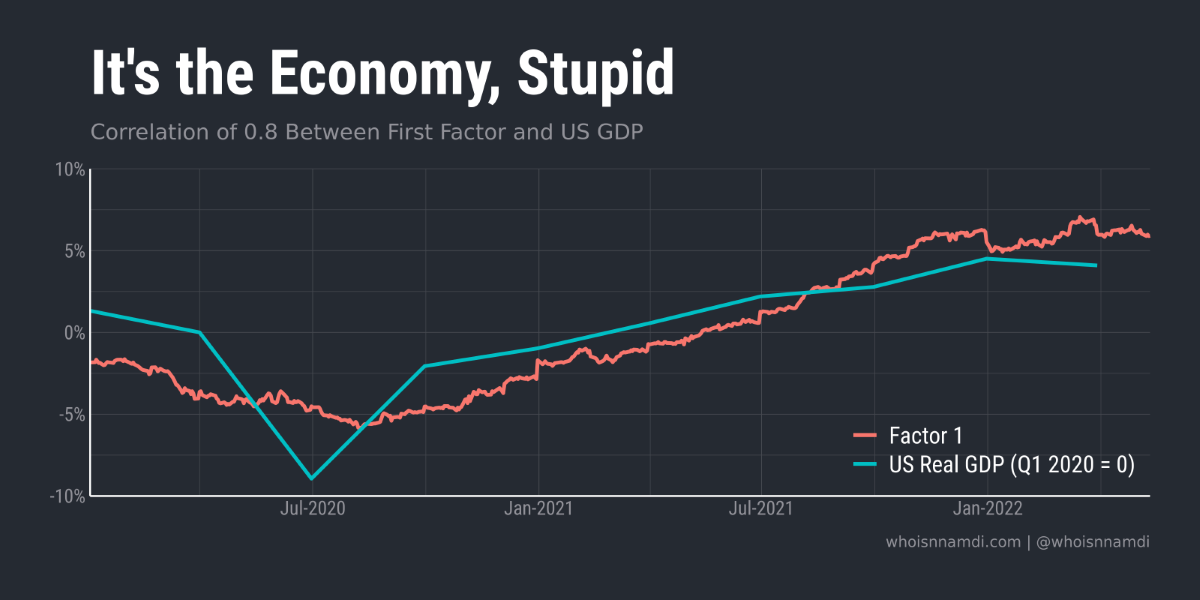 Our first hidden factor is not a particularly mysterious one.

Despite some claims to the contrary, investors believe software companies are quite sensitive to the broader macroeconomic environment. In fact, it's the variable that correlates most highly with valuations after accounting for the individual financial performance of each company.

The latent factor tracks the COVID recovery quite well, in some ways even better than the official GDP statistic, which is only released quarterly – a significant delay.

The factor provides a daily, real-time estimate of economic performance, at least that portion which is relevant for software companies (also called nowcasting).

I had less success figuring out the second factor. If you have any ideas, please send them my way!

With PCA, it's customary to plot the data against the first two factors, with the X and Y axes representing each company's correlation with the factor: 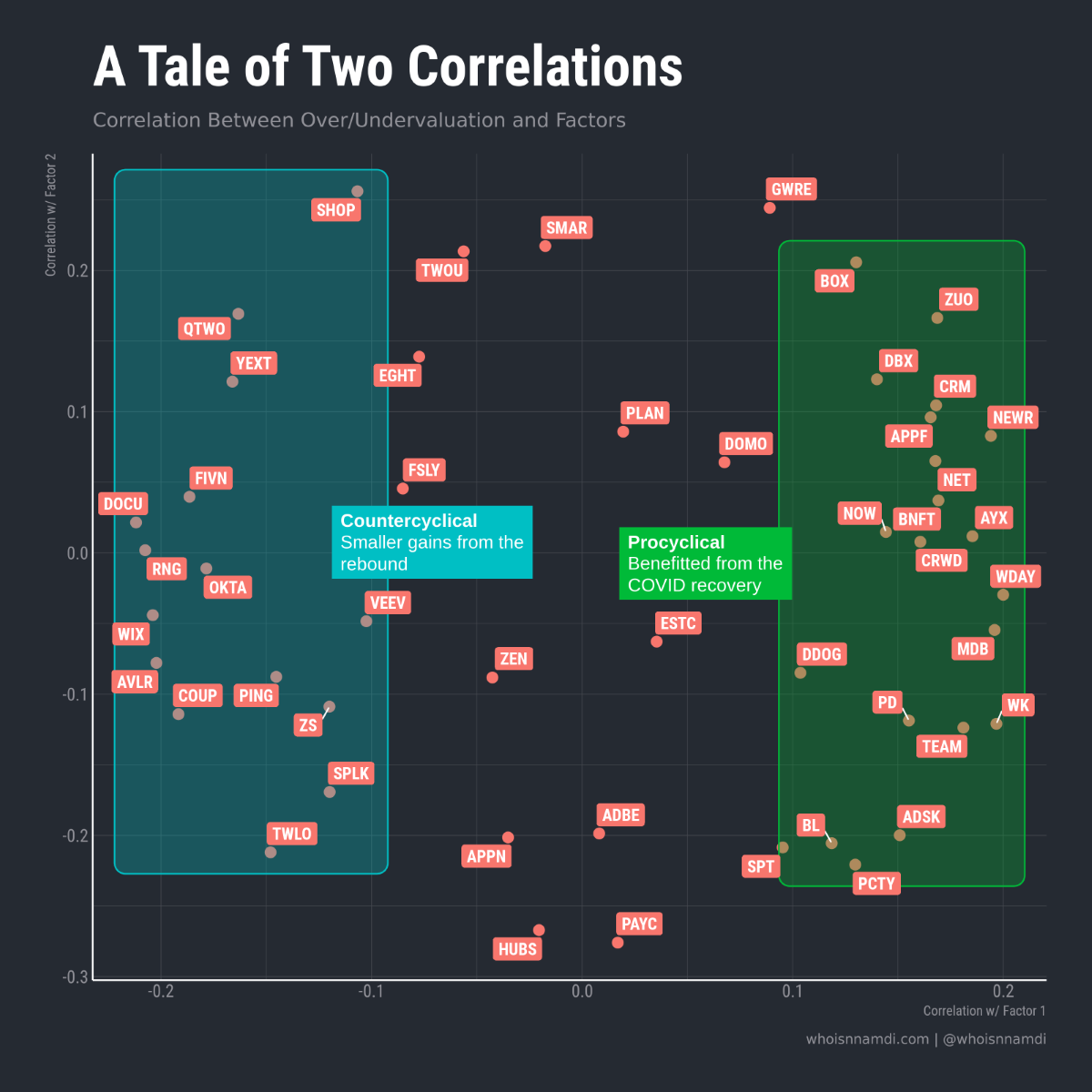 I could spend (and may have already spent) hours staring at this plot. Rather than continuing to play "Where's Waldo," here are a few clusters I noticed (Q: What did I miss?):

A step in the right direction

Now let's come full circle and incorporate the GDP factor into our previous regression while also allowing each stock to have different sensitivity to the factor.

Here's what we get: 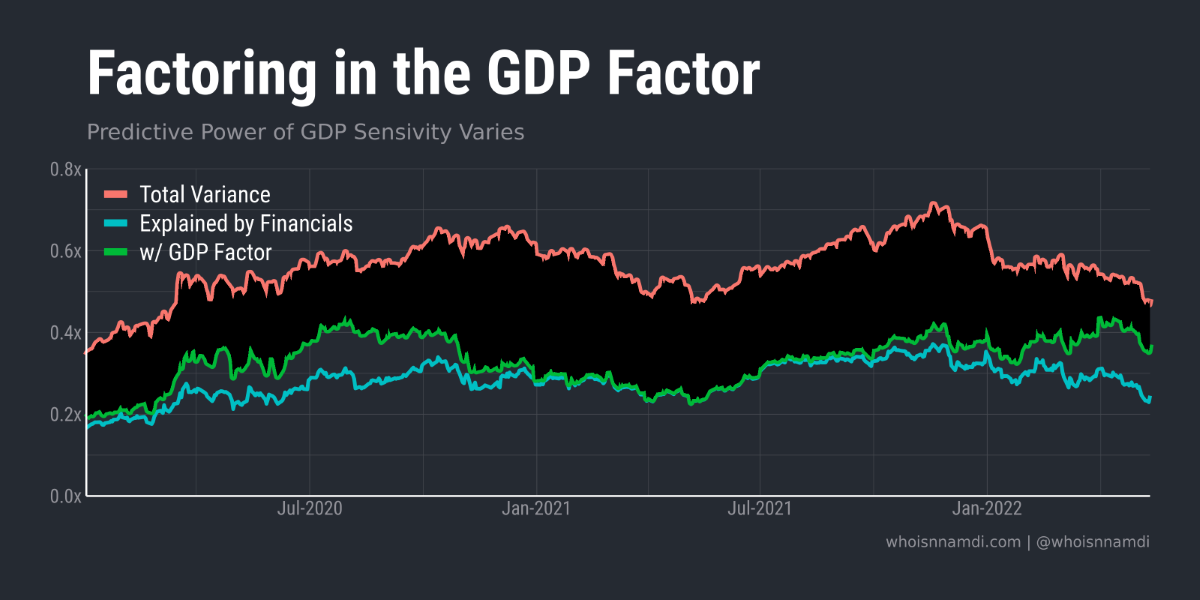 The GDP factor helps explain some of the mysterious "dark matter" but not always the same amount: 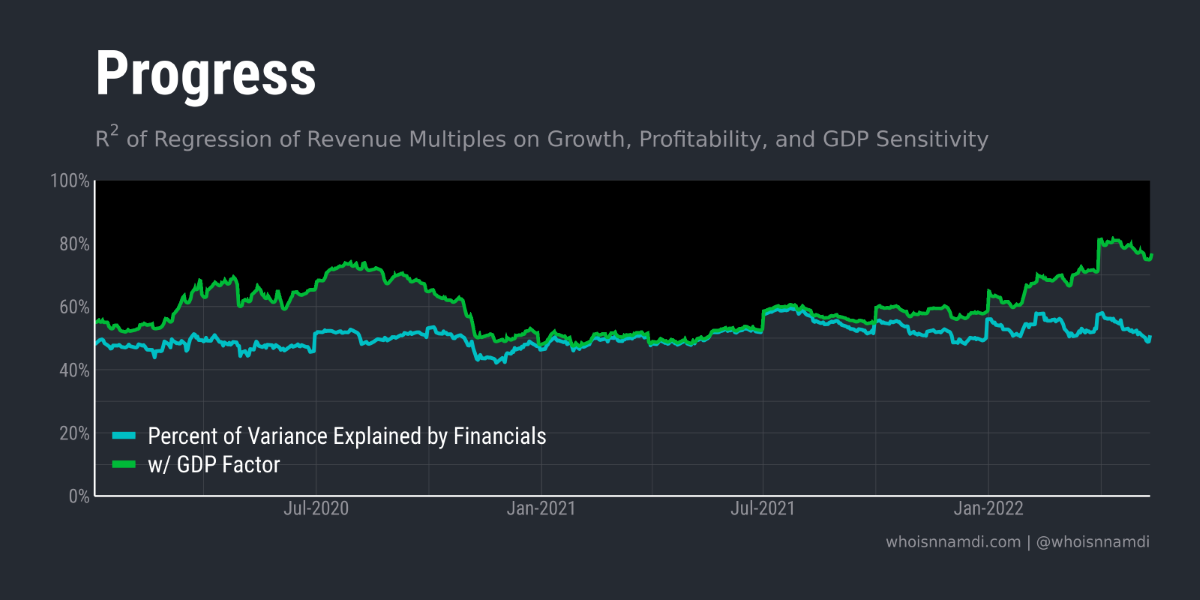 Still a lot of dark matter out there, but we've made great progress:

I'm fascinated by these dynamics, especially the middle period where, for whatever reason, economic sensitivity temporarily stopped mattering for how software companies were being valued, at least relative to one another.

So we've managed to chip away at some of the dark matter hiding among software valuations.

It's often said that the long-term growth trajectory of cloud companies is relatively secular, which is to say it's independent of general economic fluctuations.

It turns out software companies *are* sensitive to broader economic conditions in the short-run, at least in eyes of public investors.

The relevance of this sensitivity rises and falls over time:

More sophisticated factor modeling could yield even more insights. No one pays me to do that though, so I think I'll move on.

If you do have thoughts on that second mystery factor, shoot me a note!