However, private valuations are slower to adjust.

Private valuations lag public valuations, often by a substantial amount and for a long time.

As we all lick our wounds during this venture downturn, many are asking: when will it all end?

The answer? About three years.

Private valuations rose dramatically over the last decade. But so did the Nasdaq: 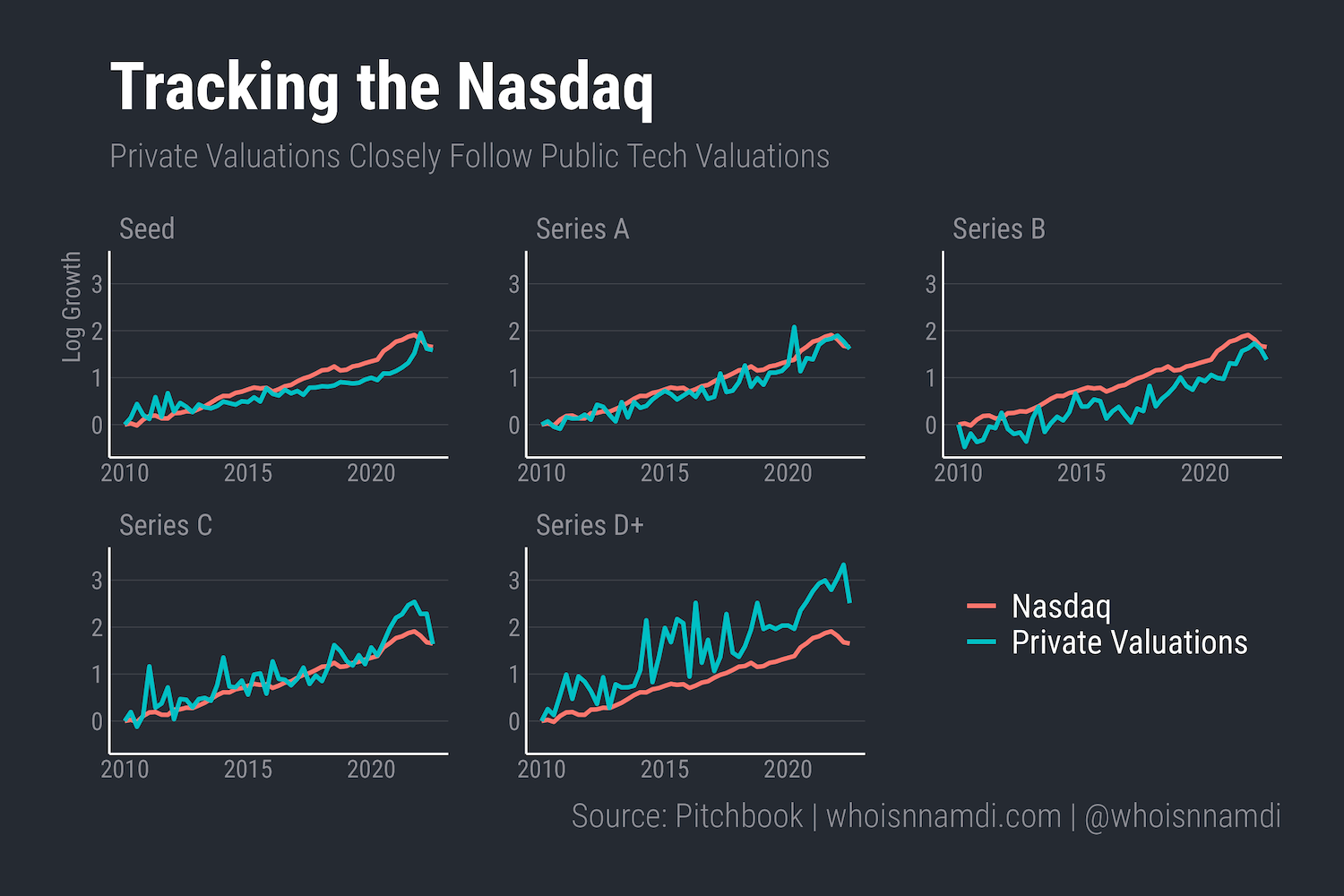 It's remarkable how well the two track one another.

One feature immediately stands out – private valuations are much more volatile than public valuations, particularly at the later stages:

If we throw each one on its own axis, the relationship is even more obvious: 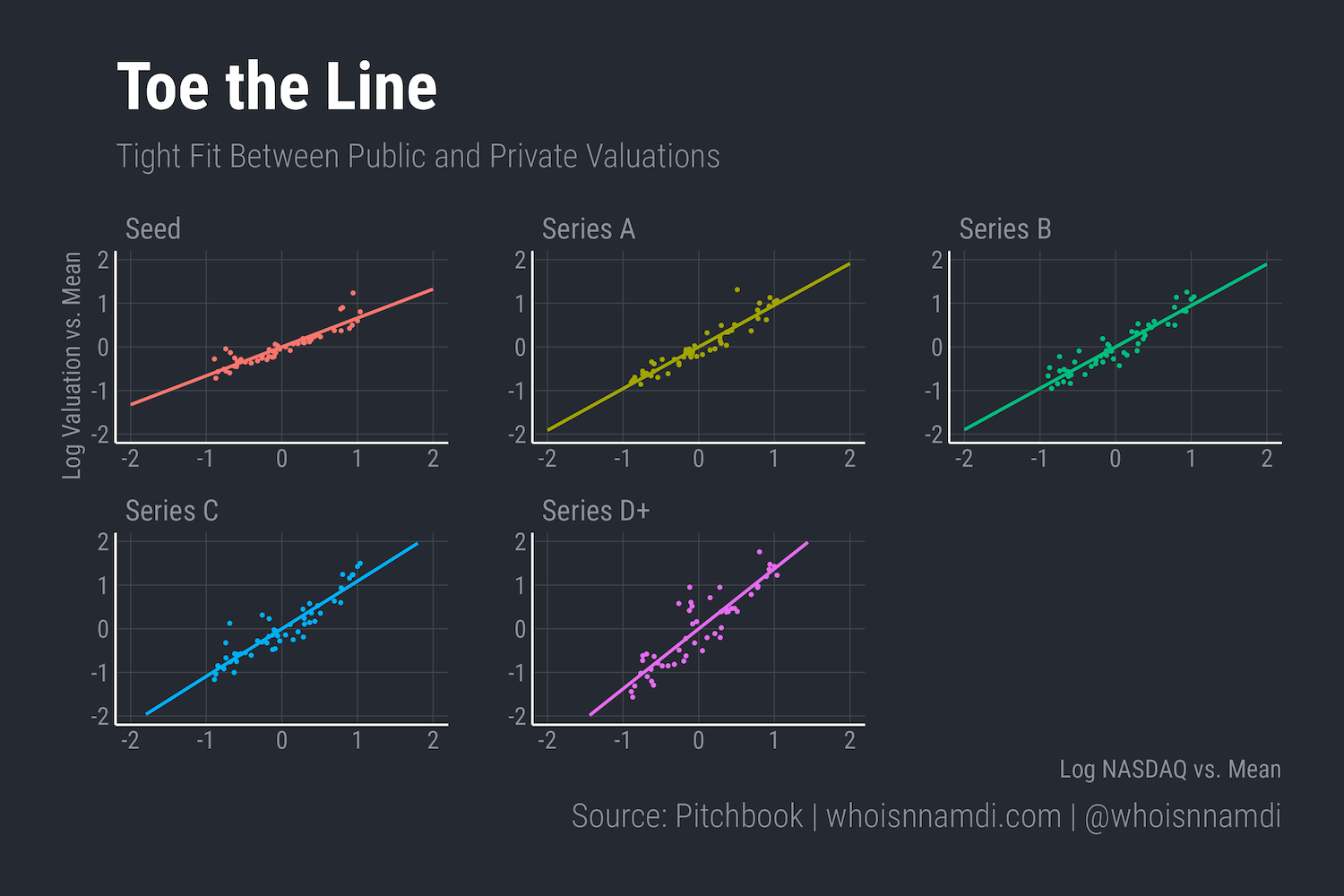 We can replicate the same analysis for private venture activity. The relationship is not as tight: 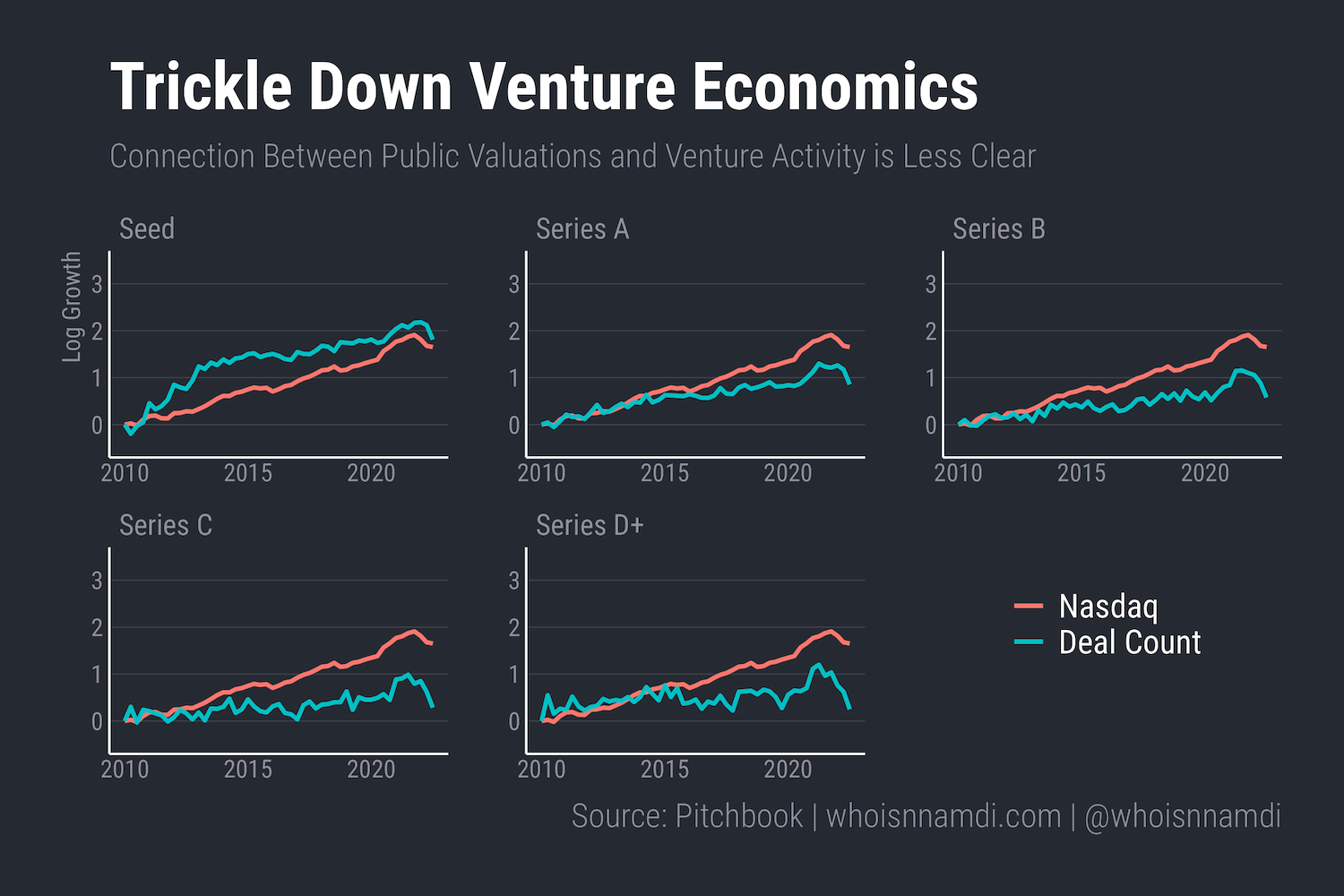 Deal activity is more or less related to public tech valuations, depending on stage. Here too we see much more volatility in the private realm than the public, again, for understandable reasons. 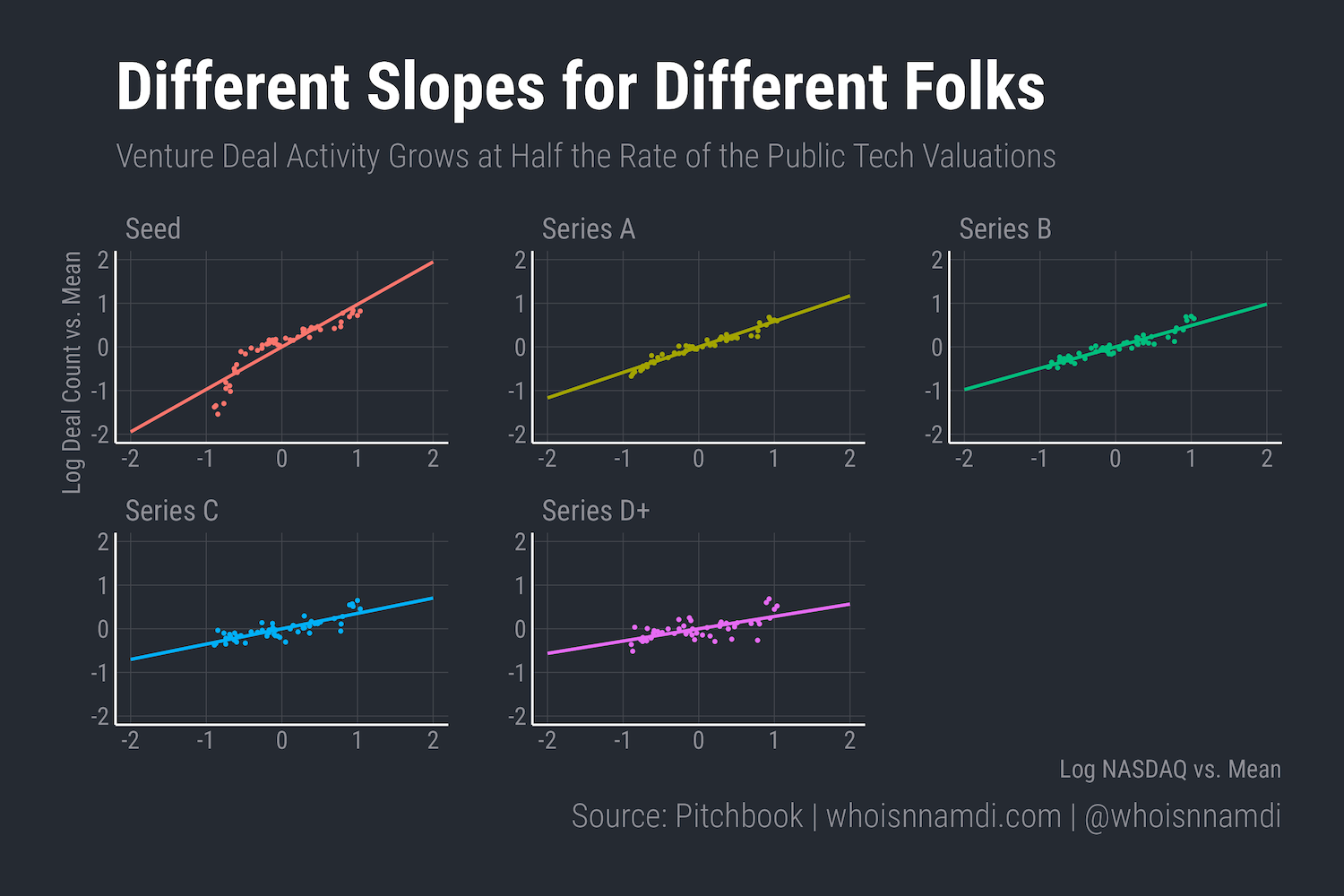 In general the slopes here are flatter than for valuations:

Though intuitive, these comparisons are not rigorous. It's too easy to find spurious relationships among variables that are all trending in the same direction. There's less risk of that in our case since public and private technology markets are closely linked, but we should be wary regardless.

We can do better by focusing less on the relationship between level of the Nasdaq and some other variable and more on the correlation between changes in the respective metrics.

The key question: how does a change (up or down) in public technology valuations affect the prices of private financings, and how quickly?

Some good ol' regression analysis can answer this.

Glossing over a bunch of detail:

The path to recovery

Hope you're still with me. Let's run those regressions and see what we get.

We'll focus on downward movements in the Nasdaq. This is how a 1% decline in the Nasdaq affects private valuations and deal flow over future quarters: 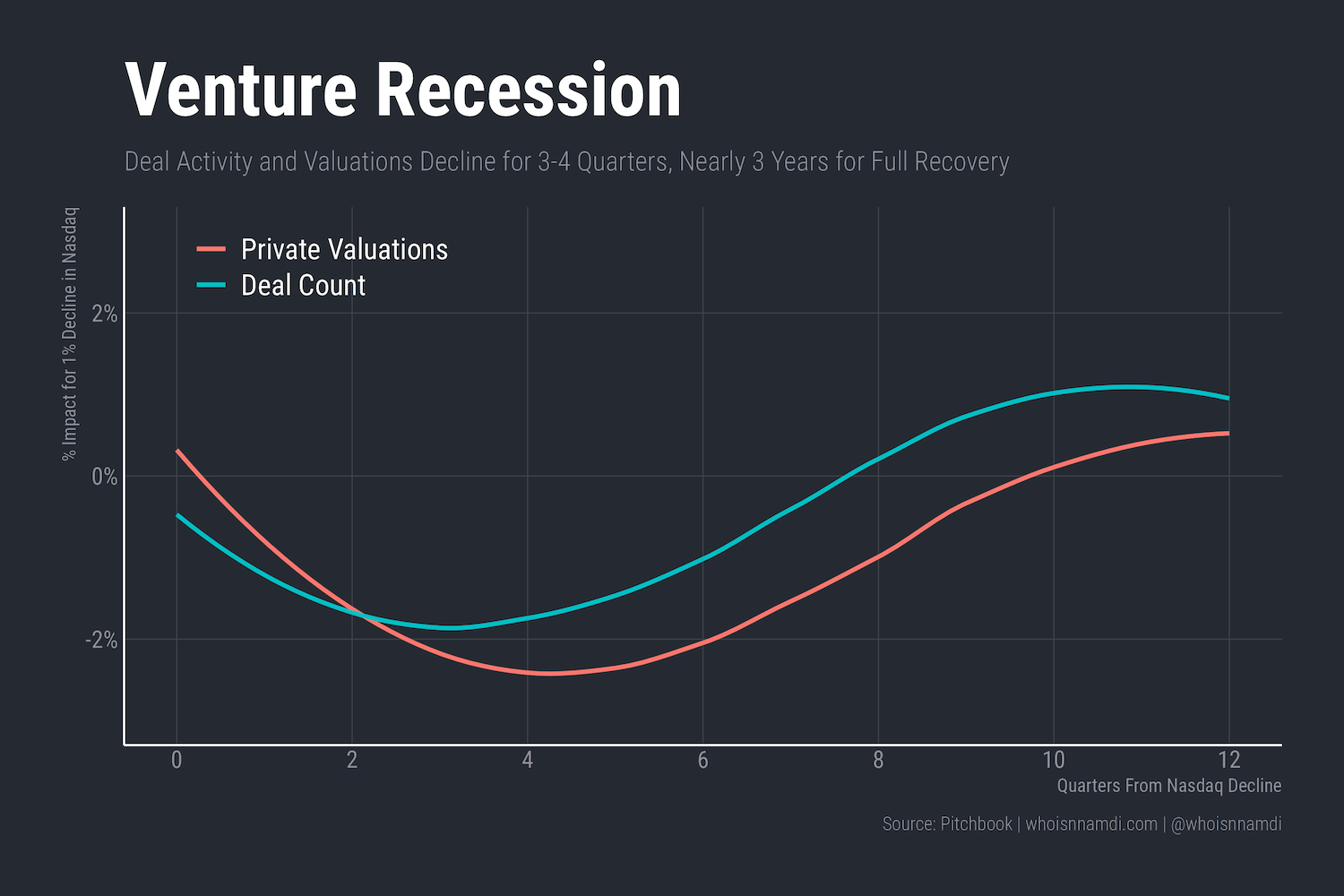 Private valuations gradually decline after a drop in the Nasdaq:

Movements in the Nasdaq reliably forecast venture deal activity too, which drops and rebounds faster than prices:

Down for a down round?

This masks a lot of underlying variance between the different segments of the venture ecosystem. Starting with valuations, let's explore how the shape of the recovery varies by stage: 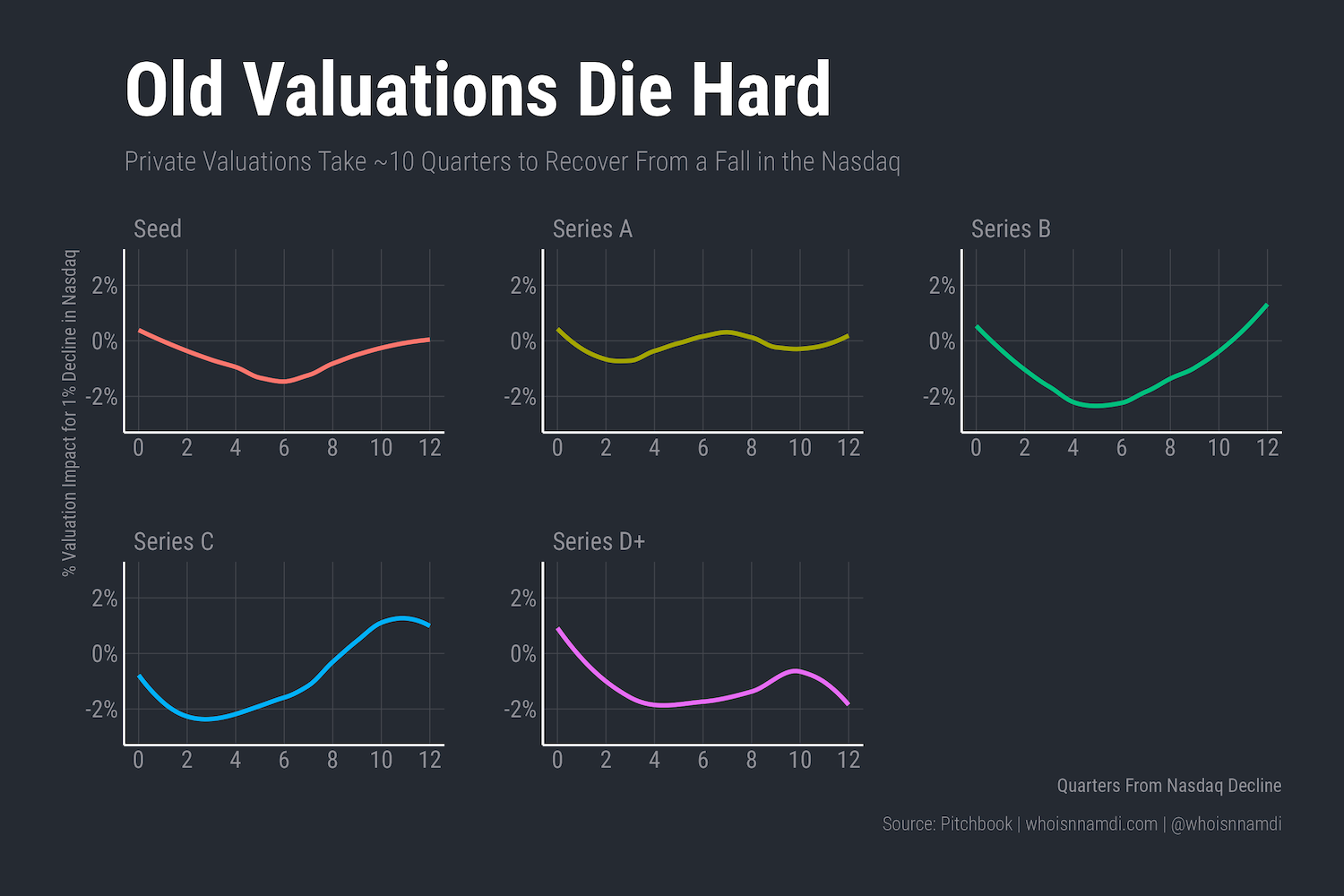 Note: these aren't exact estimates. Uncertainty grows as we look further out from initial impact, so don't pay much attention to the numbers at the 12-quarter mark. It's the shape and length of the recovery that matters most.

With some back-of-the-envelope math, we can estimate both the magnitude and the length of the current downturn:

In fact, the correction is already well underway: 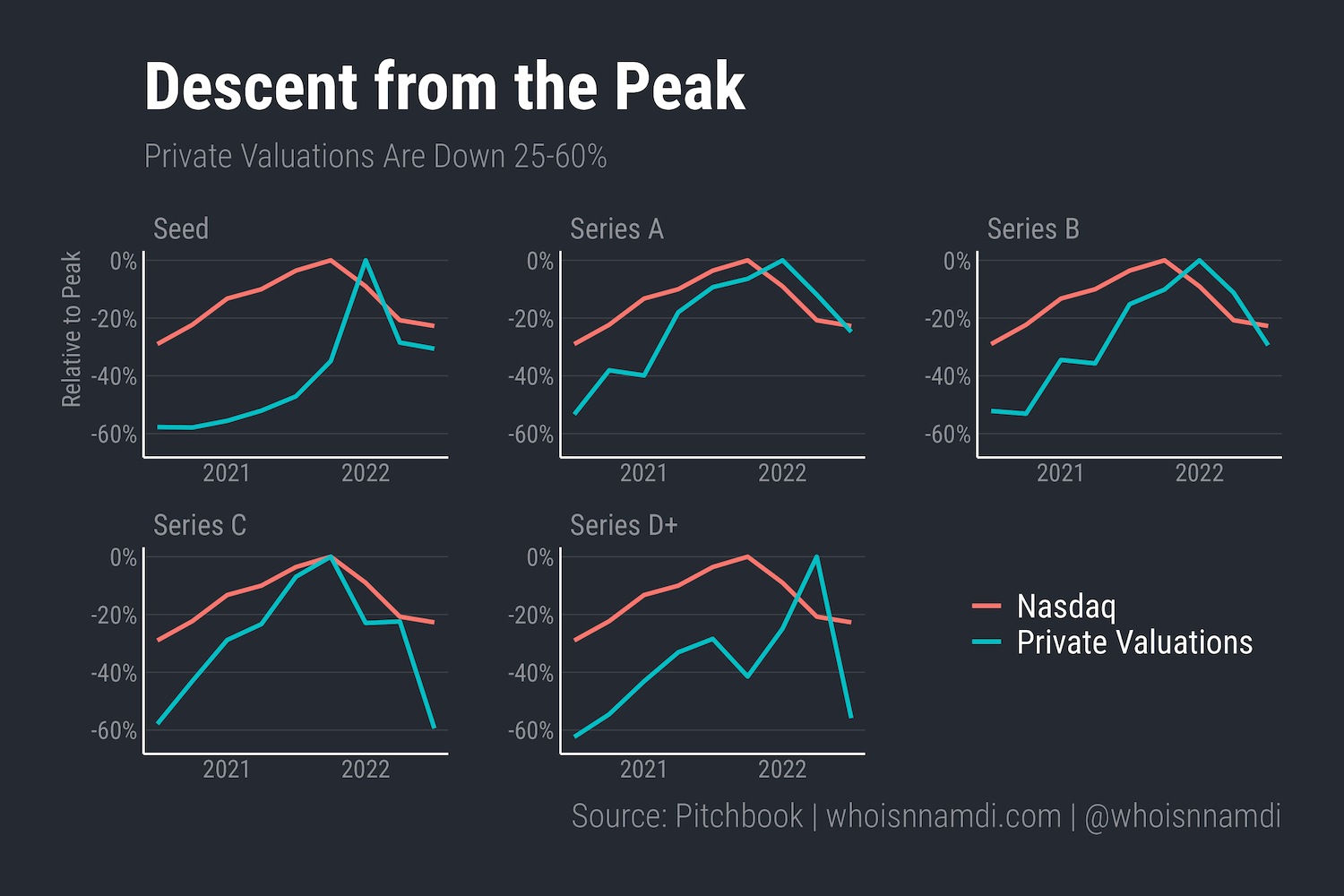 As predicted, late stage valuations drop much more than the Nasdaq, while early stage valuations move roughly in line. Prices have fallen faster than my forecast, but the magnitudes are on point.

Timing the bottom based on my regression here is a bit tricky, as the market began its decline in Q1 2022 and mostly ran its course by Q3 2022. If we use the midpoint of Q2 2022 as the "start" of the venture recession:

Again, let's focus on a 1% decline in the Nasdaq: 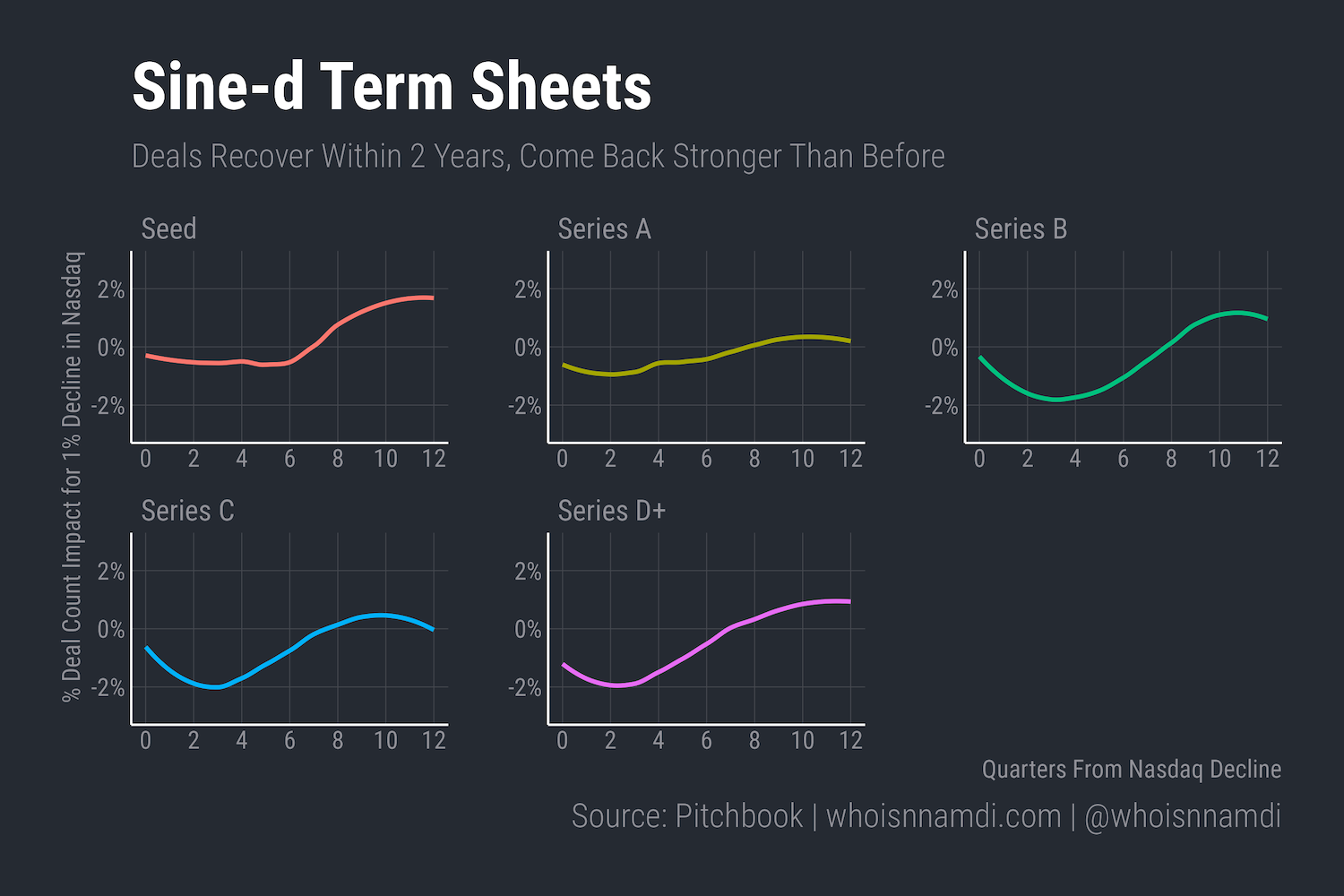 Financings follow an interesting "sine wave" recovery in the aftermath of a plunge in the Nasdaq. Again we see more severe impact in the later stages: The quarterly volume of Seeds and As drops by 0.75-1% for each 1% decline in the Nasdaq. Late stage deals sink 2%.

One ray of hope – financing activity seems to come back stronger after a venture recession.

Again, the data bears this out: 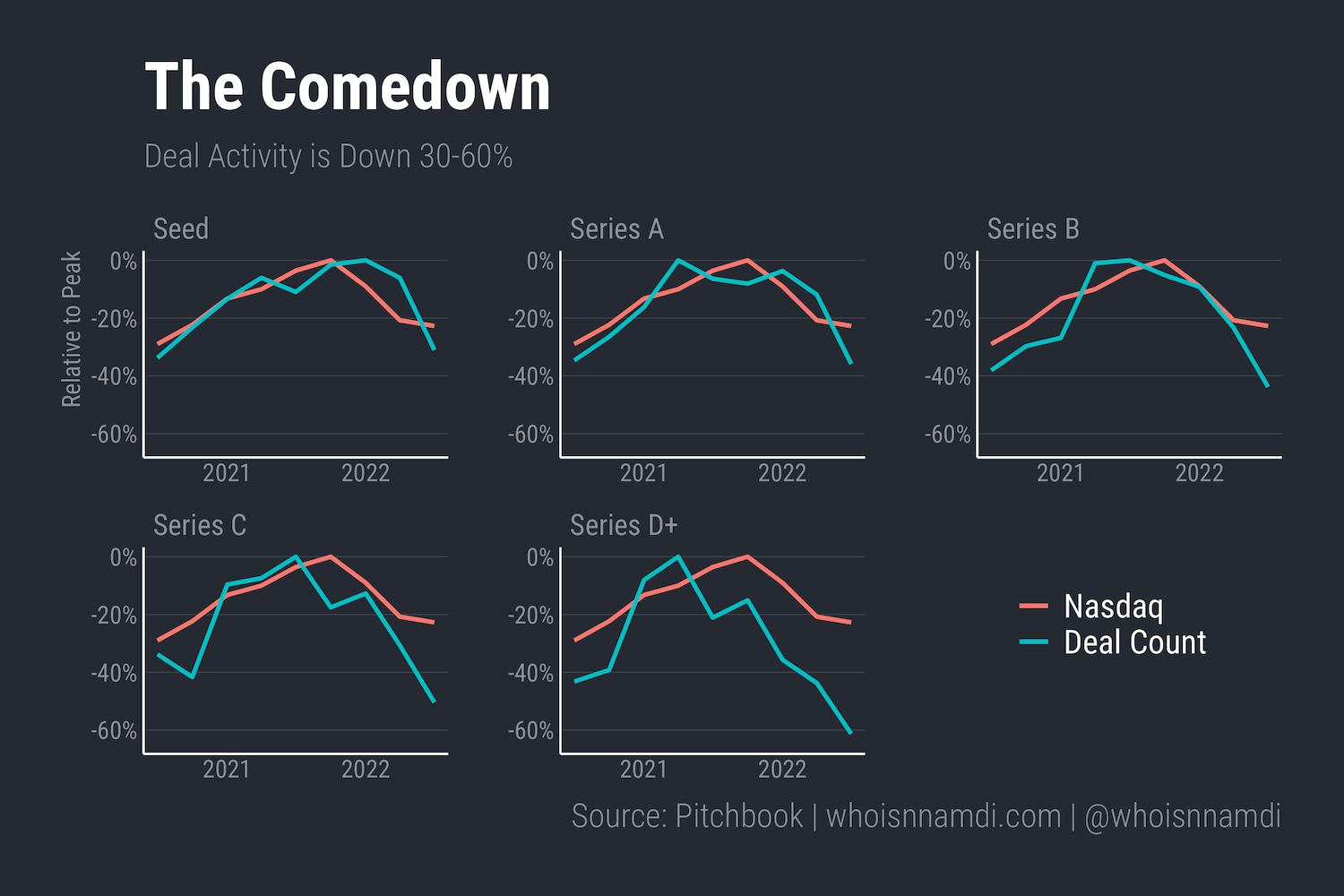 Remember, the venture deals should only take about a year to hit their low, so activity should stabilize in or around Q1 2023, notably ahead of valuations.

As I've said, these are rough estimates. All the typical caveats apply: "this time could be different," etc.

The bubble burst, but the pain won't last forever.

The historical relationship between the public and private tech markets lets us trace out the likely path of the venture recovery.

The first year is the hardest. Prices drop precipitously, in many cases, much further than their public tech comparables.

Things get better from there, with deal activity back on track after another year or so. Prices, however, remain depressed a little while longer.

All-in-all, it's a three year odyssey from start to finish.