It's Valuations (Almost) All the Way Down

Venture funding hasn't grown as much as you think.

As a result, "real", price-adjusted funding growth looks quite different from unadjusted growth, similar to traditional economic measures like GDP.

Adjusting for rising valuations, real venture funding at the early stage is only growing at half the unadjusted pace.

At the later stages, valuation-adjusted venture funding isn't growing *at all*.

It's valuations (almost) all the way down.

That gives us three components – deals, valuations, and dilution:

This framework is simple but powerful.

With it, we can explain the individual sources of growth in the venture funding ecosystem, cumulating into overall funding growth.

Let's walk through each component one-by-one.

I'll plot the growth over time of each component since 2010, leveraging data from Pitchbook for all venture deals completed in Western markets through 2021.

Let's start with growth in funding volume by stage: 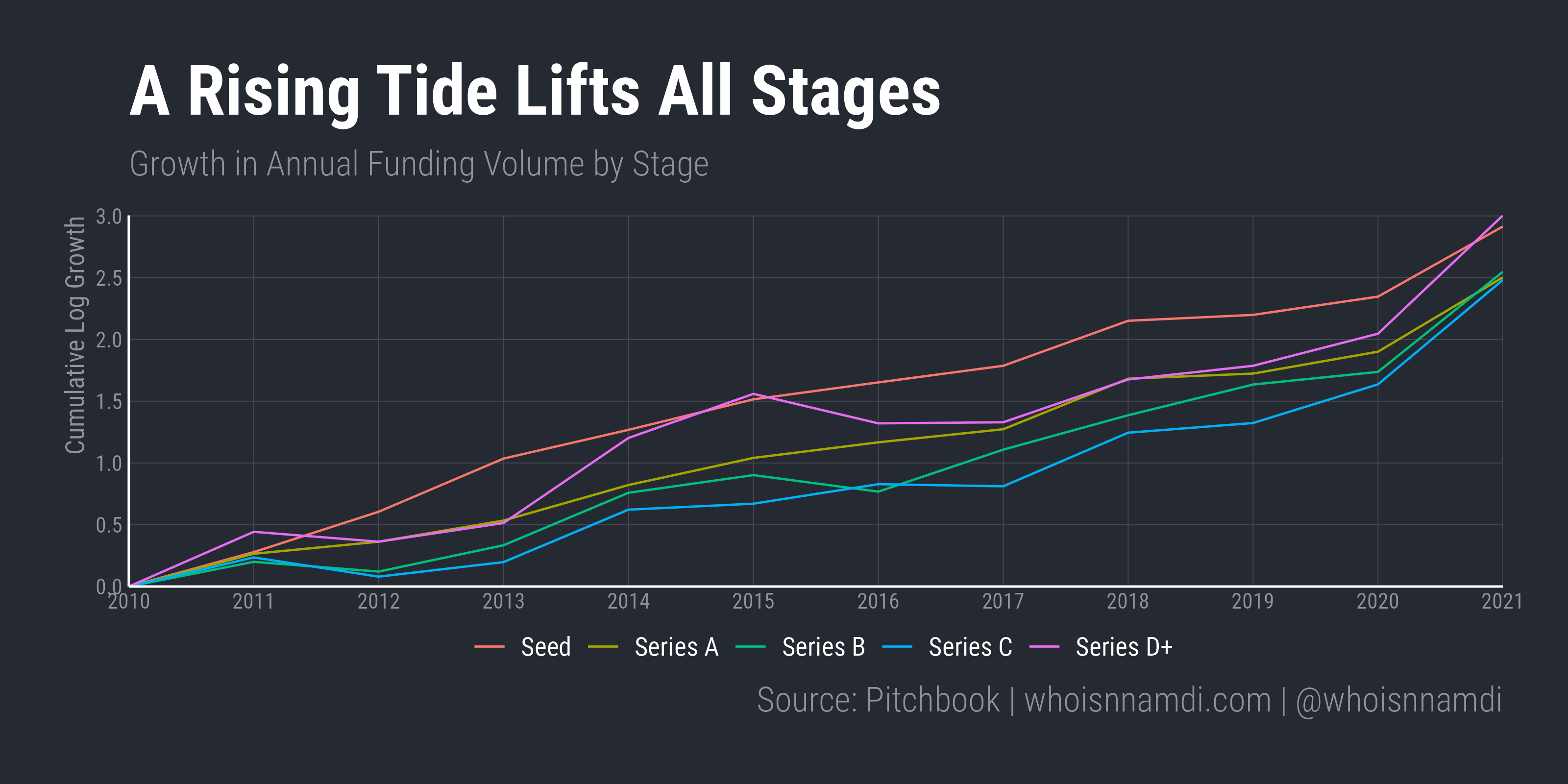 Next, let's dive into each of the components.

Deal counts have ballooned across all stages, but the Seed stage stands out: 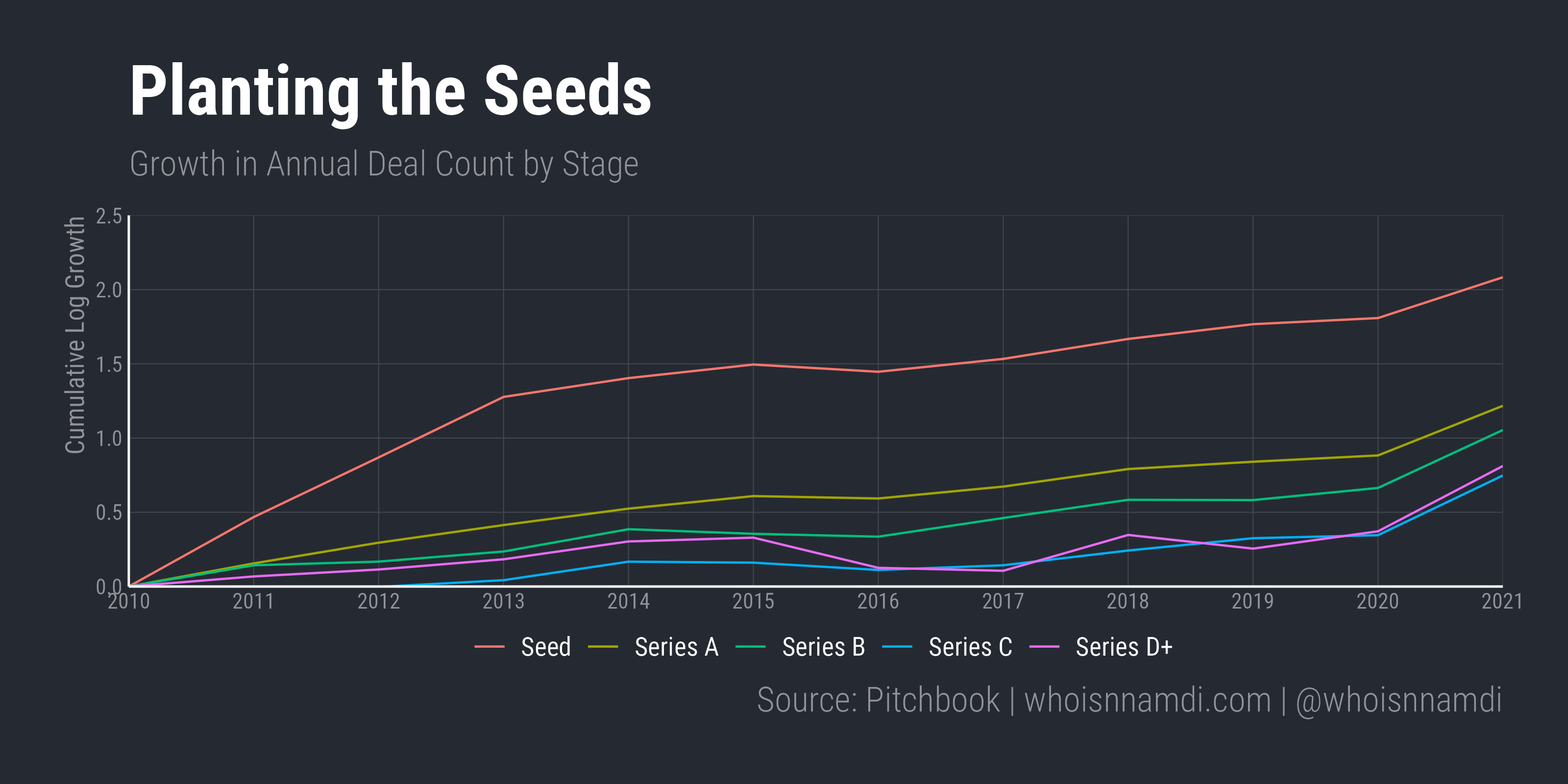 It should be noted: that Seed deals grew so much faster than the rest implies the "graduation" or "survival" rate of startups fell materially, as they've had more than enough time to mature. 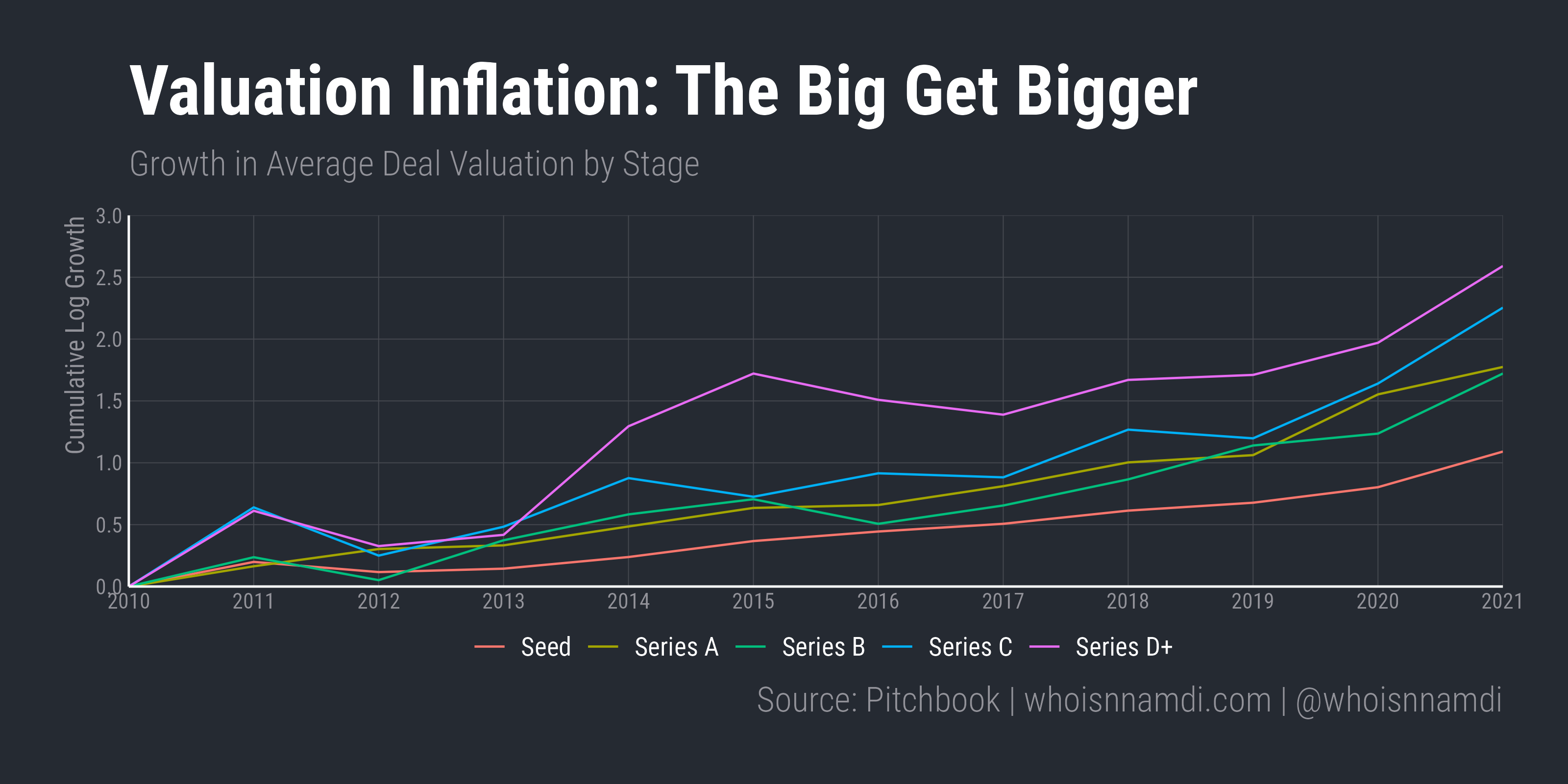 Lastly, let's look at dilution. Note again these numbers are in log points (not percentage points): 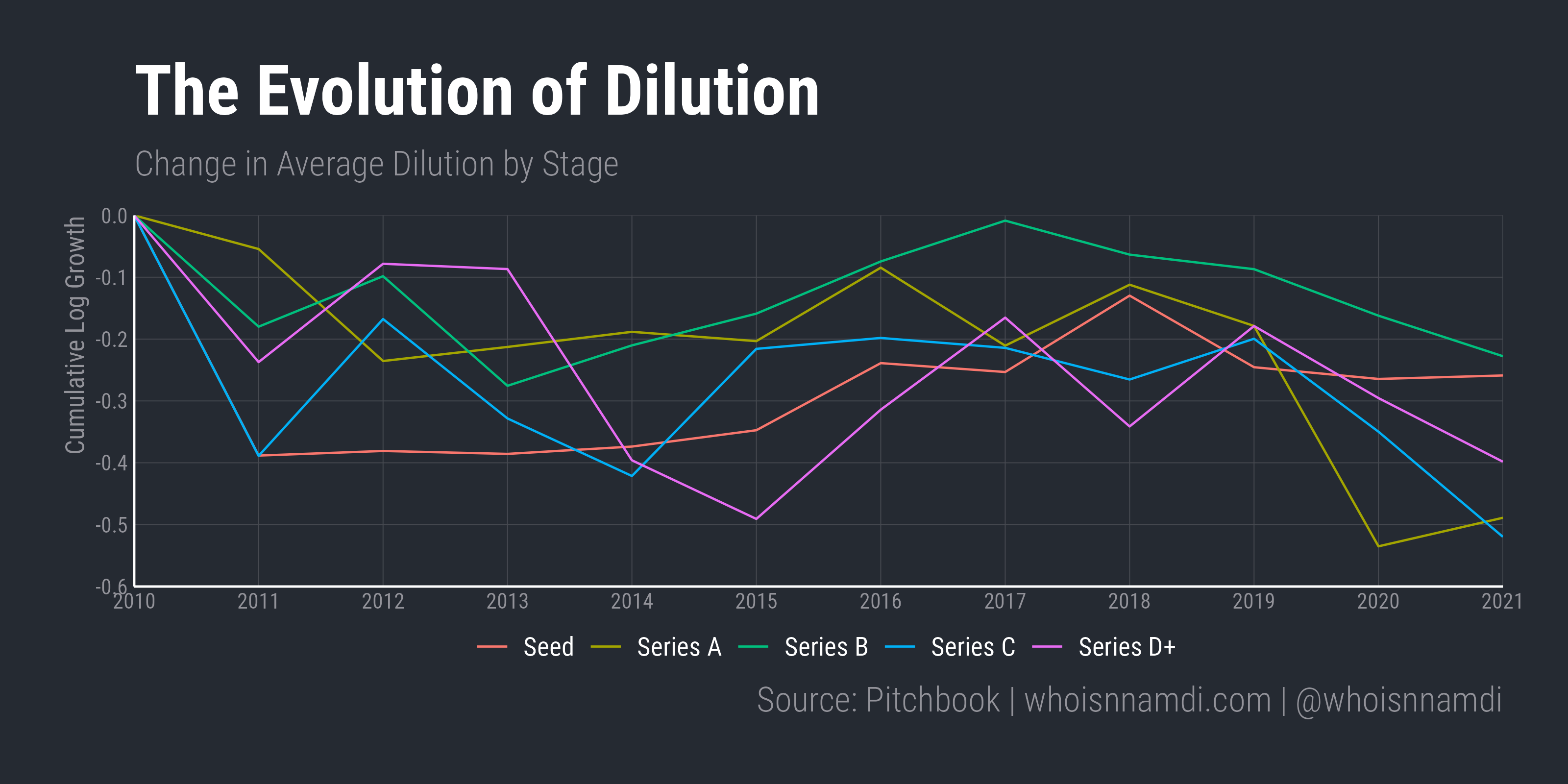 And now, the main event.

For every financing stage, let's aggregate the change in deals, valuations, and dilution to explain the cumulative growth of funding: 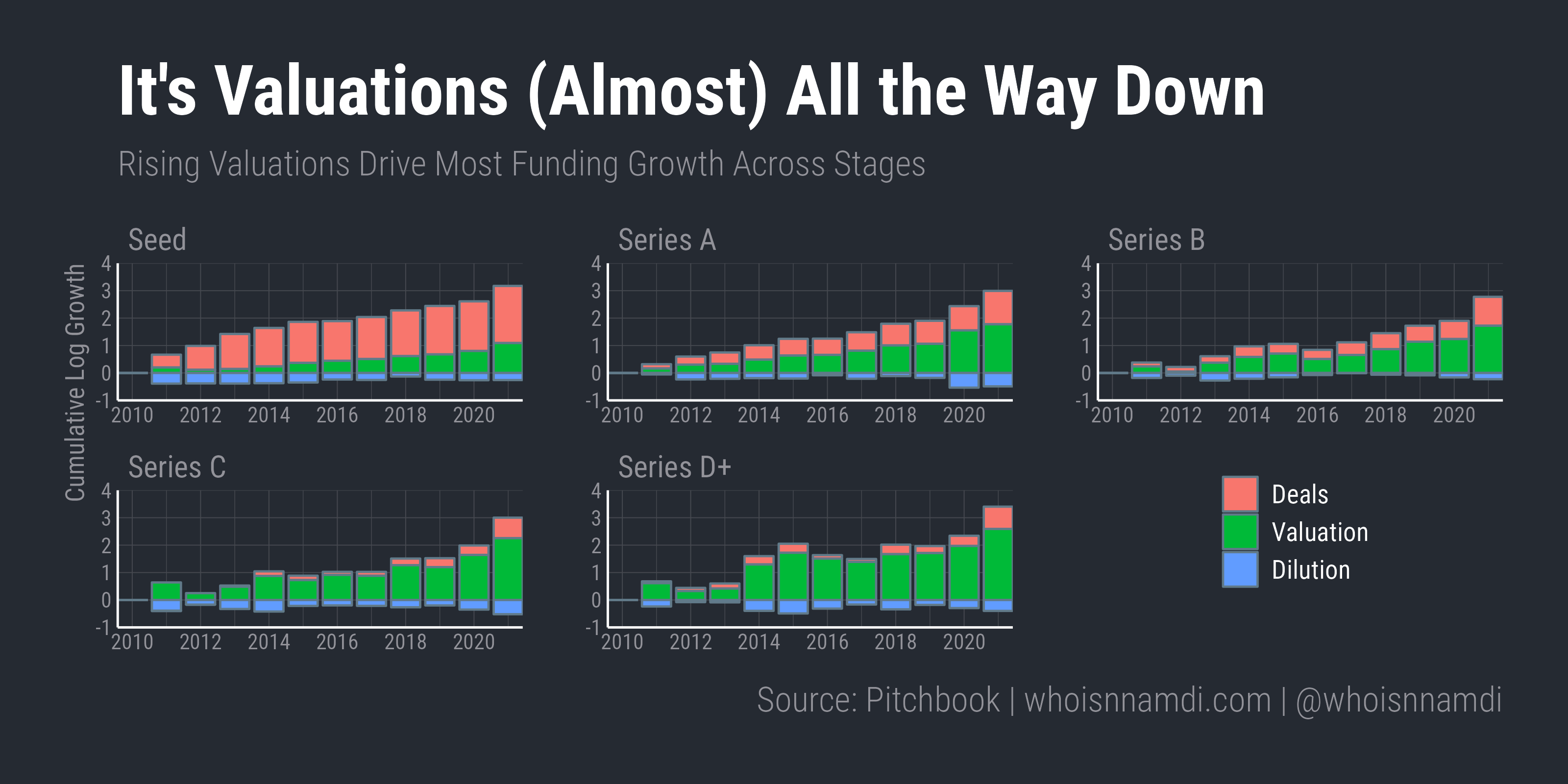 This seems healthy – growth in funding should ideally come from growth in the total number of deals.

In contrast to the Seed stage, this seems unhealthy: growth in the majority of the venture ecosystem (at least as measured in dollars) over the last decade was primarily driven by rising valuations.

Now, if you've spent a lot of time staring at data like I have, you'll know that these sorts of analyses can be very dependent on the starting year (in this case, 2010).

Just to be safe, we can avoid privileging any particular year as the starting point by instead calculating the variance in funding levels over time rather than the growth. Variance decomposes the same way as growth, but this time there won't be a "base year" affecting the results.

Do this, and the conclusion is the same – year-to-year variation in valuations accounts for most of the variance in funding volume over time at the later stages: 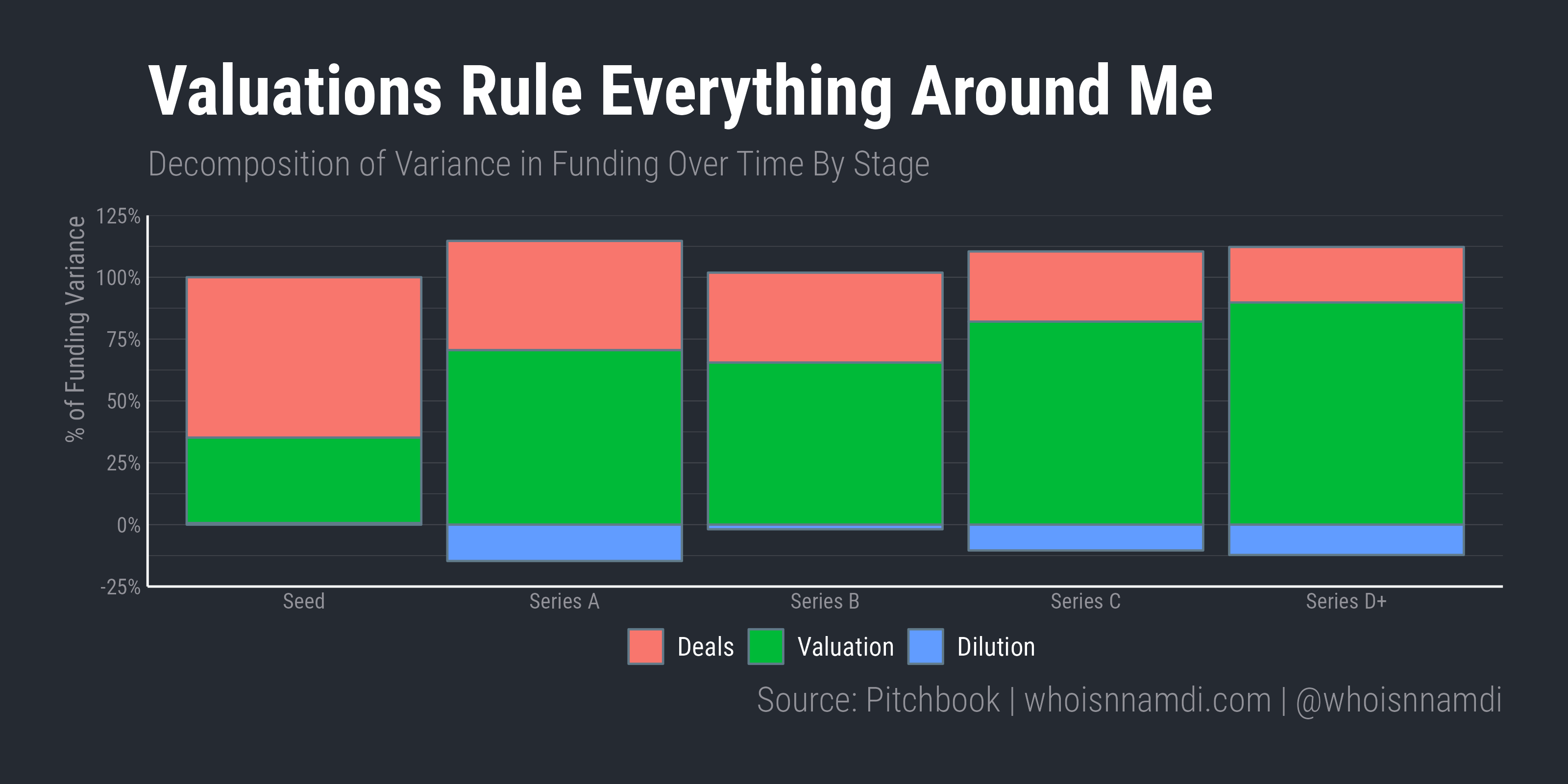 In economics, when quantities and prices rise together, you can be fairly sure it's driven by growth of demand, or equivalently, you know the market in question is supply constrained:

In this sense, the valuation inflation we've seen "comes from" the incredible growth in demand and lack of supply of startup equity.

Here's another trick – if we go back to our decomposition and divide both sides by valuation, we get the following: 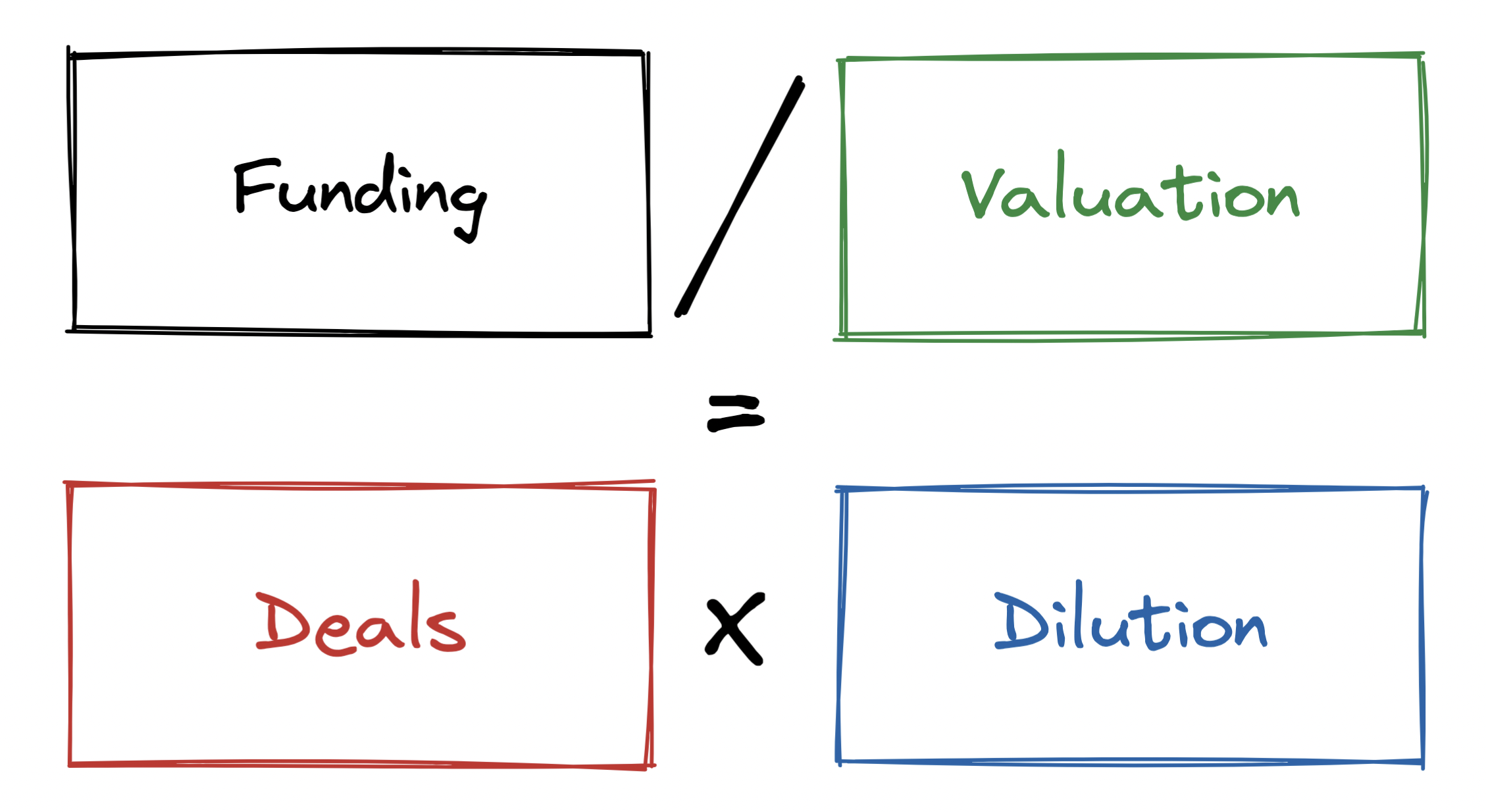 In other words, we can adjust funding volume by the average valuation at which these financings occurred to get a "valuation-adjusted" funding metric. This is analogous to how economists "deflate" nominal GDP by inflation (e.g. CPI or similar) to arrive at "real" GDP.

It's also the result of multiplying deal count each year by average dilution, i.e. the total equity bought and sold in the venture market each year.

This lets us measure "real" growth in venture funding rather than dollar-based growth, which conflates deal activity with valuation movements.

Compare this "real" funding metric to the "nominal" one I showed earlier: 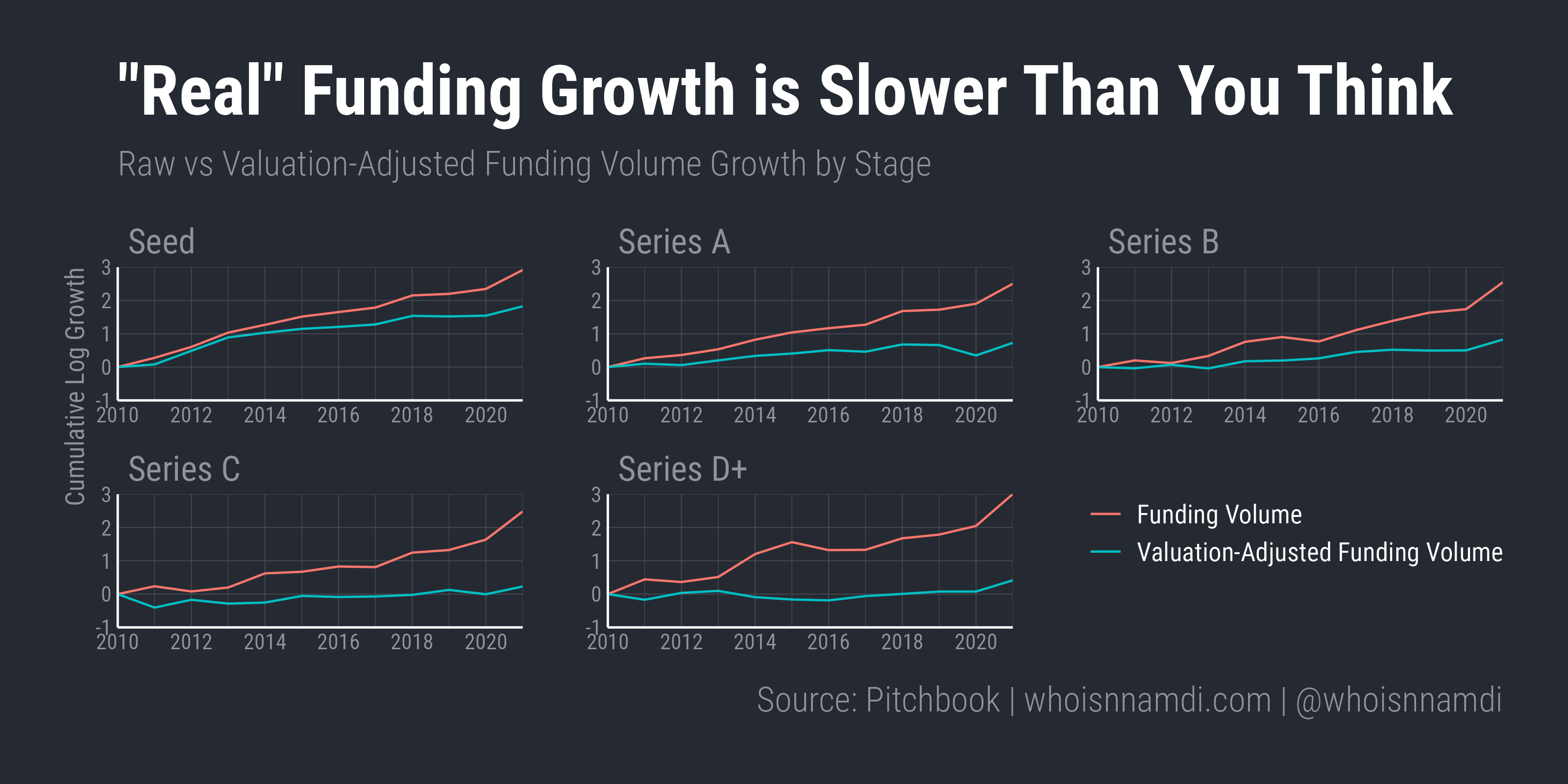 Real venture funding is growing much, much slower than you think:

I want to state this as directly as possible: there was no growth in real late-stage funding activity for a decade until the bonanza of 2021.

Said differently, no more late-stage equity traded hands in 2020 than in 2010, measured in terms of points of cap table ownership.

Now you're ready for Economics 101

This data contradicts the common narratives of the past decade of growth in the venture ecosystem.

Venture capital is about two things, ventures and capital.

Capital has been in excess supply the last decade, but ventures haven't.

Valuations can't rise forever, so over the long-run venture capital can't grow much faster than the number of ventures themselves.

In a way it all makes sense:

In other ways, it's highly concerning:

The venture ecosystem is supply-constrained – there isn't nearly enough startup equity out there to satisfy investor demand.

Additional capital drives opportunistic company formation at the Seed stage. However, the additional capital doesn't improve survival to the later stages – it simply drives prices up for the remaining companies.

I've long felt this but never had the data to back it up.

Now I do, and I think it's a big problem.