Companies Rarely Grow Into Their Valuations

Investors often justify high valuation multiples with the claim that the companies "will grow into their valuations."

It turns out this rarely happens.

Investors can justify rising valuation multiples with a belief that:

If growth accelerates, valuation multiples fall due to the denominator growing faster than the numerator (revenue or cash flow grows faster than valuation).

On the other hand, if future returns decline, the numerator grows more slowly (valuations grow slower than revenue or cash flow), also causing multiples to fall. Either outcome leads to declining valuation multiples:

Think of the "multiples are higher today because multiples will be higher tomorrow" justification as a sort of "bubble mentality" or "greater fools" explanation. Someone else will pay more for this later, so I'm OK paying more today. This of course can't go on for long: bubbles eventually pop; manias eventually subside. So, here too, multiples return to "normal."

These three explanations for valuation multiples are collectively called the Campbell-Shiller Decomposition, originally conceived in the late 1980s. It lets us cleanly account for changing valuation multiples with changing beliefs about growth, returns, and future multiples. We can even make an equation out of it (\(\Delta\) = Change):
$$\Delta \text{Valuation Multiples Today} = \Delta \text{Future Growth} - \Delta\text{Future Returns} + \Delta\text{Future Valuation Multiples}$$

Regardless of the specific cause, valuation multiples eventually mean-revert; subjective expectations eventually collide with objective reality. 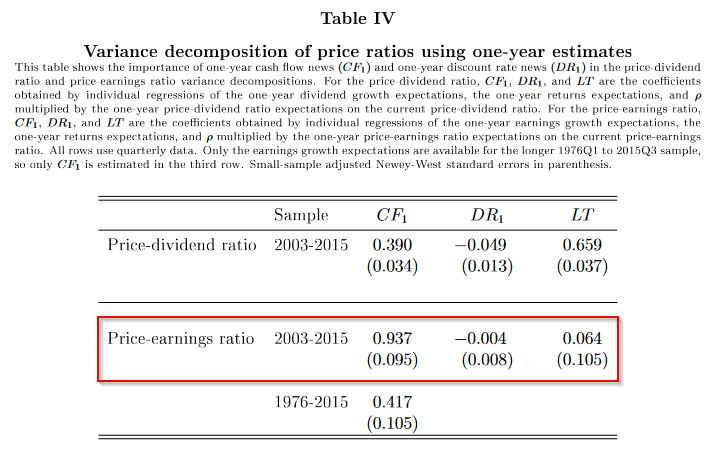 Another paper breaks down the expected returns vs growth dynamic between different classes of market participants, finding that sell-side analysts, institutional investors, and corporate CFOs all use growth expectations to explain fluctuating valuations (\(g_t\) in the table below) rather than expected returns (\(\mu_t\)): 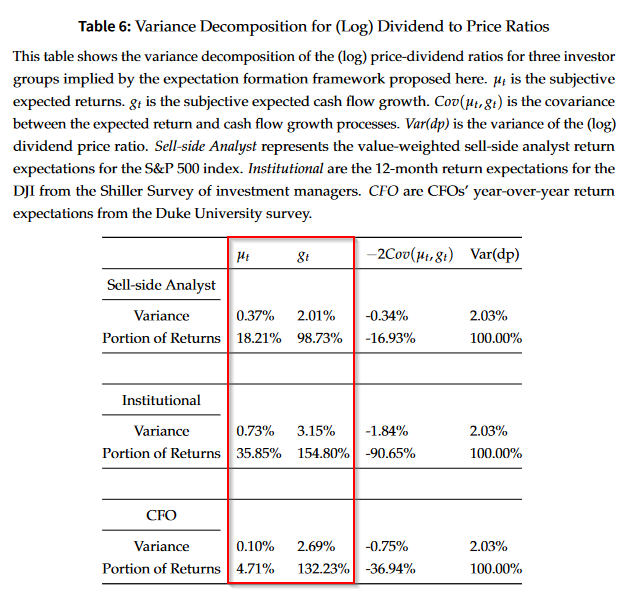 Investors see valuations move and ascribe these gyrations to changing expectations for future business growth. But does the growth ever materialize?

“the variance decomposition results reveal that all three types of investors seem to overestimate how much cash flow variation contributes to the variation in asset prices when compared to objective measures of return expectations, which show that discount rate variation should contribute the most to asset price variation” — Subjective Return Expectations 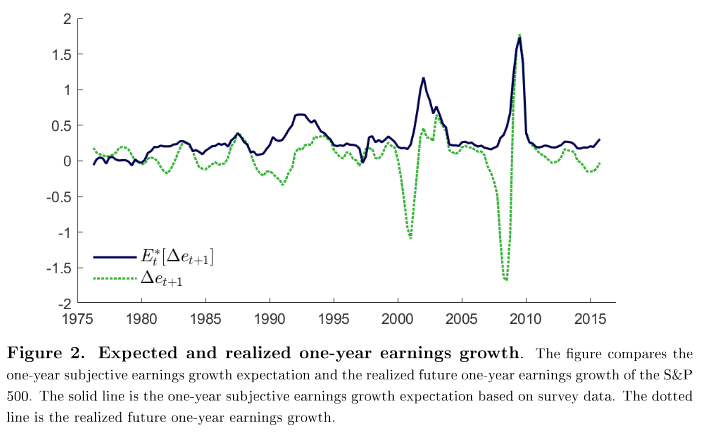 When financial researchers do look-backs, they find that high valuation multiples precede low returns. In fact, they literally predict lower returns. Per finance legend John Cochrane's 2011 Presidential Address at the American Finance Association (apologies for the pixelated 360p screenshot, YouTube was less generous back then):

"These regressions are telling us that all variation in price-dividend ratios, all of that volatility, corresponds to variations in expected returns. None of it corresponds to variation in expected dividend growth and none to rational bubbles or prices that are ever higher."
...
"The valuation ratio translates one to one to expected returns and doesn't forecast the cash flows or price change that we might have expected." — John Cochrane

Despite this sobering reality, investors are extremely stubborn about future return expectations, even in the face of rising prices. Undeterred by nose-bleed valuations, they continue to expect roughly the same return in all periods, leading actual returns (dotted green) to be much more volatile than expected returns (solid blue), which look nearly constant in comparison (right-hand chart): 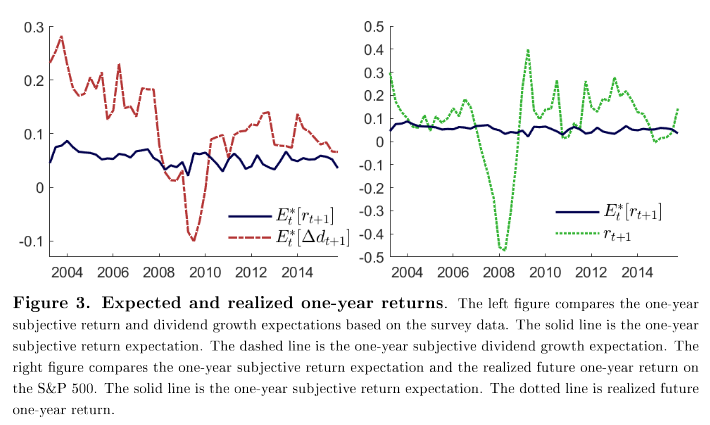 Equity investors always expect the same rate of return, regardless of how high or low valuations multiples are today, which doesn't make a ton of sense.

The data from the public markets is clear: valuations rise, returns fall.

Investors don't like to think this way, and thus they continue to expect the same return in all periods, leading to inevitable disappointment. Meanwhile, they justify their stubbornness about returns by convincing themselves that growth will save the day. It typically does not.

This data only covers public equity investors. It'd be fair to point out that growth among startups is much more variable than that for public companies, so much so that variation in startup growth could explain much more valuation variation.

That said, I find it hard to believe the future for startups could brighten so dramatically, practically overnight: 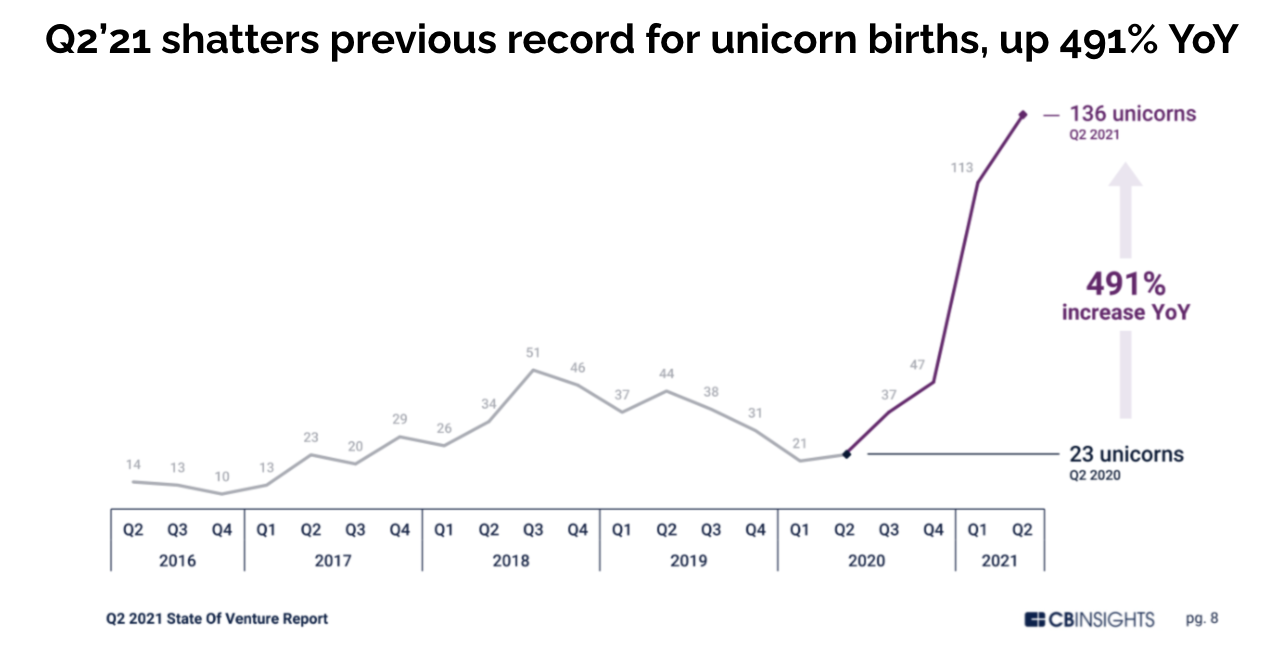 If anything, the high variability of startup growth may be a cognitive trap, seducing us to think that herculean growth alone can shoulder weighty valuations.

I think it's past time we in the venture world get serious about the valuation craze. Do we really think the future is so much brighter? Are we merely accepting lower future returns, and if so, do our LPs know this? Is it all just a bubble?

Investors rely too much on growth to justify current valuations and underestimate the risk that higher multiples portend poor returns. Investors like to think companies will grow into their valuations, but more often than not, the stock simply underperforms.

The burden is on venture investors to prove there's something special about the asset class that will help it escape the fateful relationship between valuations and returns we see in public equities.

Until then, growth is just a cop out.